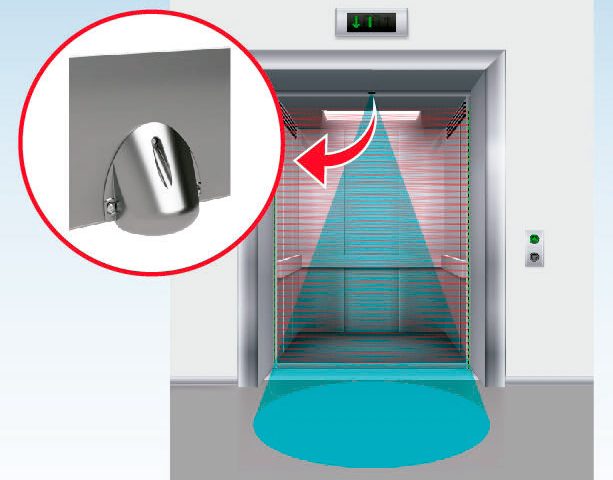 Infrared (IR)-based light curtains have been the accepted way of protecting passengers from closing elevator doors since the 1990s. However, over the last five years, there have been numerous tradeshow exhibits with new and exciting technology purporting to render light-curtain technology obsolete. More recently, the update to ASME 17.1-2019 requires detection not just for the area between the closing doors, but also of approaching passengers on the landing. However, despite these bold announcements in the market, little appears to have changed. This article looks to separate the facts from the hyperbole and so set realistic expectations on what to expect over the coming years.

Current IR light-curtain technology is, conceptually, relatively simple. IR light waves are pulsed through a series of diodes running the height of the door. At the other side of the door opening, IR detectors running the height of the door look to detect these IR light waves. A break in the signal means there is something blocking the passage of these waves. This system generates its own signal, and, in doing so, is in full control of the frequencies and timing used. This fact, combined with object detection by signal blockage, rather than reflection, makes IR light curtains inherently reliable.

However, IR light curtains have their limitations. First, their size and shape make them difficult to ship and store. Second(and more pertinent now than ever with the launch of the ASME 17.1-2019 code), they do not normally provide any sensing of people on the landing, commonly known as “3D detection” in the elevator industry. Some light curtains provide this feature, but they rely on emitting IR light waves and detecting any resulting IR light waves that have bounced off objects (e.g., an approaching person) on the landing. Sadly, this 3D solution has always had some inherent issues: it only detects objects in a relatively small area; it can’t distinguish between moving and stationary objects; and, worst of all, it requires the IR light to be reflected. Thus, any objects that absorb light (e.g., woolen clothing) are not detected.

Light-absorbing clothes led the American Society of Mechanical Engineers (ASME) code committee to specify the need to detect objects that absorb 95% of light within its new requirements for 3D detection. This is very significant, as it means any 3D detection system that relies on the reflection of light waves will struggle to meet this code or detect a person wearing highly light-absorptive clothing.

IR Time of Flight (TOF), a method for measuring the distance between a sensor and an object based on the time difference between the emission of a signal (e.g., IR and its return to the sensor after being reflected by an object), is far more advanced than a 3D light curtain. Ultimately, however, it falls foul to the same issues — namely, that if the IR light waves it emits are absorbed, rather than reflected, it is almost impossible to give a reliable detection signal. Furthermore, it has a variety of limitations in reliably detecting a relatively small object (such as a hand) pressed against the leading edge of a closing door.

The other highly discussed technology is using a camera(s) to monitor the car entrance. However, if only one camera is used, there will be no perception of depth. Distinguishing between a shadow or black shoe crossing the threshold becomes a matter of deep artificial intelligence (AI) and high-level processing. It may be possible, with enough computing power, to give reliable results. However, as autonomous vehicle manufacturers and others have found, a single camera sensor is not a realistic solution. A single camera is good at sensing changing patterns. In this way, it can provide good tracking of objects and, in doing so, with the appropriate processing, providing relatively effective 3D detection where 99% accuracy is acceptable. This is unlike the primary safety function of 2D, where 100% accuracy (even for stationary objects) is required.

Of course, such systems will still struggle with shadows and to maintain their function during periods of low-lighting conditions (e.g., lighting failure), unless they have their own light source. For a camera solution to work reliably, it would need its own light source, stereo cameras, a wide viewing angle and significant processing. This is technically possible today, but a product that does all this at a market-acceptable price has yet to be created and may never be.

Janus/Avire laboratory testing has shown how easily defeated camera or TOF systems are when exposed to the ASME 17.1-2019 test target. However, our Smart 3D meets this code. It uses IR light curtains for 2D detection combined with 3D radar technology. By using radar for 3D, which enables detection of reflection caused by matter (rather than light), this solution is designed to sidestep complexity and unreliability.