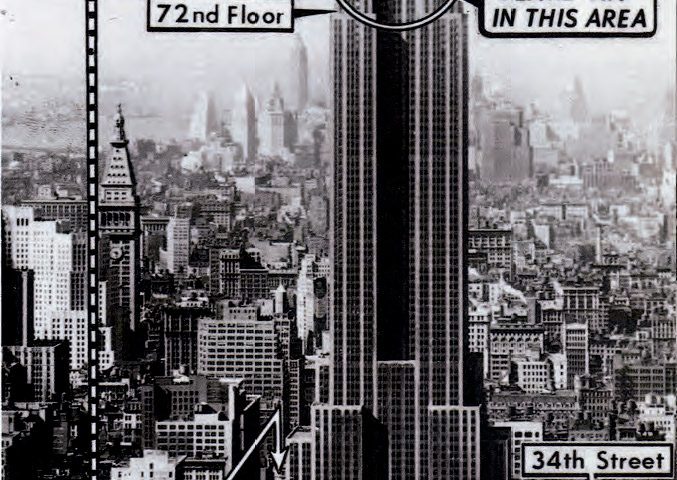 Another detail from the supplement

In this Readers’ Platform, your author reflects on when a B-25 bomber crashed into the Empire State Building.

July 1945 was a great time to be alive in NYC. Germany had recently surrendered to the Allies, ending World War II in Europe, and Japan would soon be defeated. After five years of war, people felt happy and safe.

The heavy fog covering Manhattan the Saturday morning of July 28, 1945, created a quiet stillness in the air. At 9:49 that morning, that stillness was suddenly and horribly broken when a North American B-25 Mitchell bomber crashed into the 79th floor of the Empire State building (see this month’s Online Extras at elevatorworld.com), killing 11 people in the building and three men in the B-25. The impact created a 20-X-18-ft hole in the building. As the aircraft disintegrated in a ball of fire, debris shot into the building. One of the plane’s engines ripped into the shaft of elevator number six, causing it to freefall 75 floors and crash into the pit. The lone person in the elevator, elevator operator Betty Lou Oliver, miraculously survived.

The B-25 was an outstanding, battle-tested twin-engine medium bomber, but it lacked the sophisticated flying instruments of today’s aircraft. Flying well in adverse weather such as fog depended almost entirely on the vision and skill of the pilot.

Lt. Col. William F. Smith, Jr., was considered a superstar in the U.S. Army Air Corps. He graduated from United States Military Academy West Point, where he was an outstanding student and an All-American lacrosse player. He was only 27 years old but had proven himself as a bomber squadron commander flying combat missions over Germany. He was charismatic, intelligent and fearless. However, he was also overconfident, arrogant and flippant.

Smith had been warned the fog was too thick and that he should stay in Massachusetts for a few hours before taking off. His reason for the flight was to pick up his commanding officer. He could have waited; it wasn’t that important. He had very little experience flying B-25s, as he flew the much-larger Boeing B-17 Flying Fortresses over Germany. Normally, the crew of a B-25 was from four to six men, but Smith didn’t care. The other two men onboard were passengers — a soldier and a sailor. He never should have taken off. But he did.

No one knows for sure what happened in the last seconds before the B-25 crashed into the Empire State Building. It is known that the fog was very thick, Smith was flying low, and 14 people died. People were stunned and saddened when news of the crash was reported on the radio and in newspapers. The one bright spot was the story of how 20-year-old Oliver had survived a 75-floor freefall in her elevator. But hold on. We have been told that elevators are safe — that they can’t fail, that the safety device Elisha Graves Otis invented back in 1854 would prevent this sort of thing. So what happened?

When the B-25 engine crashed into the elevator shaft, it severed the governor rope, rendering the safeties useless, before it continued to sever the hoist ropes, causing the elevator to crash into the pit. From then on, when high-rise elevators were installed, the safety system was placed on the side of the shaft farthest from the outside wall. Old timers would say, “Hide the governor rope behind the hoist ropes.”

Oliver was rescued from the crashed elevator with very serious injuries. She was not killed due to factors that provided a “cushion”: The compensating cables hanging from beneath the car piled up in the pit and acted as a coiled spring, and the hatchway itself was of a “high-pressure” design with minimum clearances about the car, causing the trapped air to compress.[1] She spent months in the hospital. Five months after the accident, while still recovering, she returned to the Empire State Building and took a ride on an elevator. She went on to live a beautiful and happy life with her three children, seven grandchildren and husband, Oscar. Oliver passed away on November 24, 1999.

Is a retired third-generation elevator man who lives in Grand Island, New York. His passions are health, safety and elevator history, and he lectures on safety. A former member of the U.S. Air Force, he studied pre-med and psychology at the University of Alabama in Tuscaloosa and engineering and safety at the State University of New York at Buffalo.