Home » Articles » A Nudge in the Right Direction 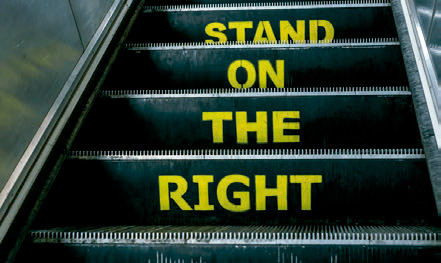 In this Readers’ Platform, your author describes how heuristics can bring escalator safety into the 21st century.

Escalator safety signage in its current format is based on the ancient concept of semiotics, or studies based on sign processes. Indeed, the current crop, developed alongside traffic signs since the late 1960s, are a fixed requirement for every escalator. The black-and-yellow colors, the stick figures, well-intentioned and carefully designed to meet regulation, are ubiquitous, but when was the last time you saw a passenger give it their full attention? Like a traffic sign on the street, it exists to be obeyed for the safety of self and others. However, unlike a traffic sign, escalator safety signs are not enforced. There is no day in traffic court for ignoring the existing escalator safety sign for the child treating the escalator like an amusement ride, or for the elderly with limited vision.

Especially not for those of us on the smartphone, or in a rush — or both at the same time. Considering there are more than 1 billion escalator rides per year in the U.S., escalator accidents are a serious problem, with tens of thousands of injuries and fatalities annually. If only there were a way for an escalator to give each oncoming rider a nudge to pay attention and ride safely.

urprisingly, and somewhat counter-intuitively, researchers have found the optimal escalator safety nudge: it is vibrant, colorful graphics on handrails, steps, and risers: the visible moving parts of an escalator.

What is not a surprise to the folks in the escalator industry is that rider behavior is the leading cause of accidents. Indeed, industry efforts to improve safety are constant, but escalator design and maintenance issues are responsible for a scant 5% of rider accidents. Leading the charge to protect the remaining 95% is the venerable Escalator Elevator Safety Foundation (EESF), which coordinates between industry leaders with OSHA-like intensity. Through EESF, millions of dollars have been invested over decades to educate children, college students and older people on safe ridership. Unfortunately, even with impressive creative efforts including videos, workbooks and partnerships, their reach is limited.

Meanwhile, airport operators and property managers alike continue to hope that riders take the time to review safety signage and engage in “reflective” thinking before embarking on that escalator journey. In reality, however, studies find that most people engage in “automatic” thinking. Nudge Theory, developed by American academics Richard H. Thaler and Cass R. Sunstein, seeks to “improve understanding and management of the ‘heuristic’ influences on human behavior, which is central to ‘changing’ people.” The use of Nudge Theory is based on indirect means of influence instead of direct instruction or enforcement. For example, placing a bowl of fruit where it is easily reached is more effective than trying to enforce a “junk food” ban.

To best identify the nudges that work for escalator safety, it helps to first define unsafe behaviors and identify the statistically likely victims by age group. According to data gathered by Cameron Nicolson in his “Risk Mitigation Associated with Airport Escalator and Moving Sidewalk” analysis, published in 2008, the leading statistical group for limbs becoming entrapped in and around escalator steps is children younger than 5, even when adult supervision is present. Nicolson identifies children seeing the escalator as an amusement ride, along with their natural curiosity, as causes for the accidents. On top of that, 51% of reported child injuries on escalators are due to falls; however, the majority of falls — 90% — are suffered by older riders. Contributing factors include poor vision, balance issues and sensory overload from the “wallpaper illusion.” Identified by optometrists Theodore E. Cohn and David J. Lasley in 1988, the wallpaper illusion in escalators is defined as disorientation caused by the movement and pattern of the treads against the “featureless buffed stainless-steel skirts.”

The remainder, which includes the majority of behavior-related escalator accidents, are caused by distracted adults. In 2008, shortly after the introduction of the iPhone, almost 20% of reported accidents were caused by the rider carrying out another task while riding an escalator. Given the proliferation of smartphones since then, one can only imagine the current level of casualties. Finally, other identified contributing factors to accidents include not holding the handrail, faulty mounting/dismounting, carrying baggage, running, pileups and confusion about which direction the escalator is running. Nicolson concluded his study by stating, “Signage that reinforces the escalator safety messages are more helpful than involvement in community-based education programs.”

Moving Graphics and the Nudge

When it comes to nudges, relevance matters. For example, if the Dalai Lama endorses a nudge relating to well-being, it is more likely to be more positively received than if it were endorsed by a corporate manager. Thus, while semiotics led to the design of current safety signage, broader, more advanced applications of semiotics can have better safety results. In language and signage design, “stimulus response compatibility” is a major area covering several individual heuristics.

An obvious example is the automatic association of green, not red, for “go.” This simple concept was put into practice in a Swiss study by Dr. Alexandre Alahi and Dr. Luigi Bagnato on escalator passenger flows using green (“walk left”) and red (“stand right”) handrails. Their investigation, using constant monitoring technologies, sought concrete proof of whether the color visual cues on escalator moving handrails influence a prescribed behavior. Their findings not only confirmed an instant impact, but also found an increase in the prescribed behavior in the month after the cues were removed. Furthermore, as behaviors were analyzed, researchers discovered that riders were also more likely to hold a clean-looking, colorful escalator handrail.

More recently, a 2016 statistical comparison by the Escalator Passenger Safety Strategy (EPSS) committee of the London Underground selected 12 initiatives that comprised a mix of both nudge techniques and direct information, such as traditional safety signage. The study was conducted over a course of six months on 20 escalators that had the highest occurrence of incidents and accidents. Of the 12, only seven initiatives passed the quantitative and qualitative criteria for success. Of the seven, the top three practical strategies with the highest impact on safety and modified behavior were:

Interestingly, the other initiatives that had a significant impact were holograms and bright red combs. This evidence supports the theory that bright colors and enhanced, moving visuals are more effective for passenger safety. A 2010 study published by Kusima, et al., in the Journal of Interactive Marketing supported the theory that vibrant moving graphics impact sensory and cognitive capacity, fostering a higher level of attention and awareness among recipients. Accordingly, researchers have attributed higher levels of visual attention to features such as colors, motion and orientation. What works in advertising can also be applied to safety.

Unfortunately, it is partly this association with advertising that has limited the scope and acceptance of colorful escalator graphics in the U.S. The escalator parts in motion are carefully calibrated, engineered, regulated and maintained. They perform an important function of crowd conveyance in bustling venues, not to mention the fact that escalators can be a critical part of a building’s architectural aesthetic. It is understandable that there is reluctance from operators and owners alike to add NASCAR-like graphics to escalators.

Now, however, as robust technologies for escalator graphics on handrails, steps and risers are introduced to the U.S. from Europe and Japan, the options for effective safety graphics have increased. Furthermore, given COVID-19, antimicrobial handrail graphics are available to meet society’s changing needs. Meanwhile, in an opportunity for established manufacturers, operators, and contractors of escalators, the idea of developing custom graphics is an exciting new domain.

The psychological study of heuristics has existed since the 1970s. The more recent concept of Nudge Theory seeks to democratize and simplify heuristics so it can be applied to countless daily problems that require an effective behavior modification. Advertisers have been using nudge techniques for decades, but in the service of safety for the billions of escalator riders around the world, these techniques have a greater purpose. Riders, who range from young children to the modern, distracted adult and the elderly deserve a safe escalator ride.

For best results, combine escalator handrail, step and riser graphics. Add a splash of color and a dash of safety messaging. Rather than provide distraction, escalator graphics on the moving steps, risers and handrails have proved successful in capturing the attention of distracted riders at a critical time. They help these people who are distracted or with limited vision easily perform the visual-based instant calculation required of relative step-to-handrail speeds necessary to embark and disembark safely; they promote holding of the handrail; and they indicate the safe part of the step for the curious young. The novelty of art and design on escalators can advance semiotics even while being exciting to behold. Most importantly, it places the focus on the moving — not the static — parts where the attention needs to be. After decades of service, stick figures in yellow and black attached to the side of an escalator have matured to the point where they can give escalator riders a little nudge.

Founder and managing partner of RailEyes, a provider of full-color, graphical films that are applied to escalator moving parts to draw riders’ attention and make the ride safer. Bhanjee has more than 20 years of global experience in manufacturing, transportation, healthcare and other sectors, and has worked as a management and strategy consultant. He studied at the Harvard University Graduate School of Education, and holds a BA degree in finance from the University of Texas at Austin.

New Equipment Released Around the World

Changes at the Top for EW

Out of Harm’s Way

“Three Ps” on the Banks of the Mississippi

Big plans and projects include infrastructure, supertalls and accessibility upgrades.