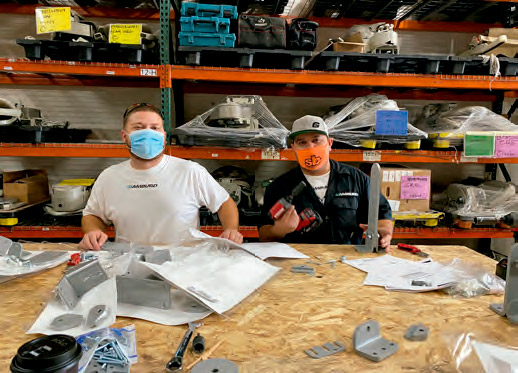 Team members, during the morning rush, prepare parts for a stairlift installation.

Entrepreneur Israel Gamburd forged his own path into the accessibility/home elevator business.

That may not be the way they teach it at Stanford Business, but for Israel Gamburd, it’s been a self-learned roadmap for success. The father of three, whose wife, Regina, is a partner in Gamburd, Inc., has gone from helping at a seniors group home operated by his mother to running a successful Los Angeles-based accessibility equipment dealer with two locations and 30 employees. Several years ago, the company added home elevators to its lineup of stairlifts, wheelchair lifts and other accessibility devices, making the company a full-line provider of solutions for elderly and disabled people who want to live independently, as well as homeowners who want to make life a little easier.

Gamburd, who describes his path into the accessibility business as an “unplanned journey” — “It was all from the heart” — embarked on the road to successful entrepreneurship when he was 10 years old and his family emigrated from Israel to the U.S. His mother, a nurse by training, became a housekeeper and caregiver for senior clients. An acquaintance gave her the idea to open a group home for elderly clients. She rented a house, took on six women to care for and enlisted Gamburd and his two siblings to help. It was not easy work.

“As I got older, one of my duties was to take care of these people and bathe them,” Gamburd said. “I was the bigger of the three [siblings], so I had to lift the heavier clients.” The difficulty involved led him to visit an accessibility tradeshow, where he saw an overhead lift, which is used to raise people out of their beds. Gamburd said that, while at the tradeshow, he signed up to be a dealer, then installed the lifts in the group home. “I basically redesigned the shower and redesigned the rooms so that we could lift these patients in and out of bed and into their shower chairs, so [the lift] made my life a lot easier. It’s kind of like a lazy caregiver, but in a good way.”

By this time, he had tired of the family business and wanted to do something different, so his experience at the tradeshow inspired him to strike out on his own, starting his own accessibility shop. He recalled:

“When I became an accessibility shop, somebody called me one day and he said, ‘Hey, do you do those lifts that go up and down the stairs?’ I said, ‘Yes,’ although I’d never done one. I reached out to Bruno, a local manufacturer, but [it] kept steering me away, because [it] already had a local dealer and didn’t want to open another, but I kept on hounding them and said, ‘Listen, I have a job, I want to do this. I’m serious.’ And, finally, a woman who worked there told me to meet her at an accessibility tradeshow. I did, and she said, ‘Listen, if you’re serious, we’re going to have training next week in Wisconsin. If you’re serious, sign up and fly out and do the training.’ When I got home, I booked my ticket, and that’s how I became a Bruno dealer.”

A Bruno factory representative began coaching Gamburd in ways to get his business numbers up:

“I guess he saw something in me that other people didn’t. He said, ‘You’re doing this much. Your numbers are good, but maybe I can help you improve.’ I asked him, out of curiosity,
‘Who is your number one dealer?’ He said, ‘I have a few dealers around the country. They do a good job, and they’re big dealers.’ I said, ‘Am I close to them?’ He said, ‘Nah, you’re not close, but you can slowly chip away at it.’ I said, ‘Do me a favor. Introduce me to those dealers. Just make an introduction. I don’t compete with them; we’re not in the same market.’ So, he got me phone numbers to four of them, and I called them all up and I told them I would like to meet with them, and they all agreed. The meeting happened in Denver.”

During this meeting, which occurred in 2010, these successful accessibility business owners offered an assortment of tips, with everybody exchanging ideas. One of the contractors told Gamburd that his company had recently switched its vehicle fleet to Ford Transit vans, which are small, efficient vehicles that are more cost-effective than larger work vans. To make them suitable for jobs, they removed the front passenger seat to make room for parts and tools.

Gamburd noted that removing the seat would not leave a place for the helper to ride. “You don’t need a helper,” the contractor replied. “The stairlift is a one-man install.” After the meeting, Gamburd went home and asked his two installers if they could do stairlift installations on their own. He explained to them that, rather than having a helper hold the rail, they could use a trick he learned at the meeting: use an old tennis shoe to hold the rail. After giving it a try, they told Gamburd it was actually a better way to do the job. “They came back and said, ‘It’s good, because the other guy doesn’t get in the way.’”

“Later that year, I became Bruno’s number one dealer. We’ve been doing stairlifts ever since, but along the way, we would get calls every now and then from people asking, ‘Hey, do you guys do elevators? Do you do wheelchair lifts?’ We didn’t want to diversify too much, but one customer said, ‘If you guys did elevators and wheelchair lifts the way you do stairlifts, that would be great.’”

The customer praised Gamburd for its prompt customer service, saying, “Whenever we call you, whether it’s for service or installation, you’re always there; you always pick up the phone; it never goes to voicemail.”

With that kind of encouragement, Gamburd began offering a simple home lift as part of the company’s lineup for several years, but he eventually “made the big jump” and decided to offer “an actual, real home elevator.” Upon obtaining the proper licensing, Gamburd added Savaria home elevators to the company lineup.

Gamburd said he’s able to offer different options for his Savaria elevators. “If you do an elevator in the city of Los Angeles, it has to have a machine room, so we use a hydraulic unit. If you’re outside the city where the code is more up to date, you can use an Eclipse, which is [a machine-room-less elevator]. And they also have a product called the Vuelift, which is a glass elevator.” For wheelchair lifts, Gamburd uses Bruno units, installing both residential and commercial versions.

He said Savaria is a large company with up-to-date technology, which is why he chose it for his home elevator line. He promotes his elevators with a display model. “We put one in our showroom, and we’re now selling wheelchair lifts and residential elevators. It’s a brand-new addition, and, considering it’s our first year in the full-on residential elevator business, we’ve done extremely well.” He continued:

“We never took on more than one brand. We always figured, if we’re going to do something, we’re going to pick one line, and we’re going to work it, master it, stock the parts and do it right, so we learned how to do Bruno stairlifts and wheelchair lifts, and Savaria home elevators.”

Gamburd operates across much of Southern California — Los Angeles, Ventura and Orange counties — and has a second shop that covers the San Francisco Bay area. Each branch has its own warehouse: a 10,000-ft2 facility at the L.A. office and 5,000 ft2 in the Bay area. Including both facilities, Gamburd employs approximately 30 people. He emphasizes service regardless of the size of the job, noting that, while chairlifts and elevators are “probably 90% of our business, if somebody needs something as simple as installing a grab bar in the bathroom, we’ll do that.”

Home accessibility is, of course, a big business. Gamburd said he’s seen a lot of consolidation in this segment of the vertical-transportation industry, with larger companies buying smaller ones. His goal, he said, is to expand his business into San Diego and, long term, cover all of California. He summed up:

“I’m proud of my success. When I originally thought of the concept for my business, my dad was disabled, and I worked in a nursing home. It was just a perfect storm for this to happen. I said, ‘You know, I’m going to be in a business where I’m going help people get in and out of the house, in and out of the shower, up and down the stairs and travel between multiple levels.’ Back then, when I told somebody what I did, they were confused, and, even today when I tell somebody what I do, they’re like, ‘So are you an elevator guy, stairlifts, grab bars
— what do you really do?’ Well, it’s all of the above. It’s whatever it takes to help somebody stay at home.”

Difficulties in Comparing the Results of Lift-Traffic-Simulations