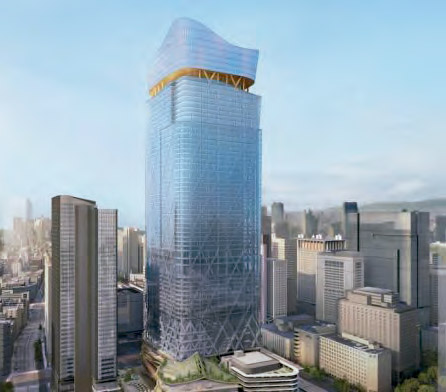 Hitachi to Supply 300 Elevators to HDB

Hitachi Elevator Asia has won a contract to supply 300 elevators for residential buildings in Singapore, the company announced in September. The deal, reported by Benzinga, is the latest large contract the company has received from the Housing & Development Board (HDB). The company was awarded another contract to supply 300 elevators for the HDB in 2019, which at the time was its largest single order in Singapore. The company is reportedly among the top-three providers of new elevator equipment in the city-state. Other recent contracts have included elevators, escalators and moving walks at the National University of Singapore; Changi International Airport; and Guoco Tower, the tallest building in Singapore.

KONE has won an order for 90 vertical-transportation (VT) units for the Punggol Digital District, the company announced in September. The Punggol development is a 50-ha smart, sustainable project meant to be a testbed for new concepts in living, working and delivering services. It will be home to a business park, residences, a market village and the Singapore Institute of Technology, and will include buildings up to 55 m tall, or 12 stories. The Punggol District is being developed by JTC and designed by WOHA Architects. KONE is supplying the business park with 40 MonoSpace® and 22 MiniSpace™ elevators, and 28 TravelMaster™ TM110 escalators. The VT system will be equipped with the company’s destination control system and E-Link™ facility management tool.

More than 300 units slated for Harbin and Wuhan.

MELCO Elevator Lao Sole Co., Ltd., a subsidiary of Mitsubishi Elevator (Thailand) Co., Ltd., won an order to supply 14 elevators and four escalators to the new National Assembly building under construction in Vientiane, Laos, Mitsubishi Electric announced in September. Replacing an assembly building built in 1991, the new, 35,000-m2 building will have six floors, including one below ground. It will be served by NEXIEZ-MR elevators and Z type escalators. Mitsubishi Electric observes the equipment is energy efficient, with the elevators using a gearless traction machine with a permanent-magnet motor and the escalators equipped with a user-detection sensor that means the units operate only when being used.

An order for 229 escalators at 19 stations along Line 2 of the subway in Harbin extends the OEM’s presence in China, particularly in Heilongjiang Province, where it is the largest subway escalator provider, Business Korea reported. Hyundai Elevator announced the order, equivalent to roughly US$241 million, on August 31. In 2017, Hyundai Elevator won a contract to supply 52 escalators to five stations along Harbin Subway Line 3 and, the following year, an order for 66 escalators in five stations on Line 1, bringing the total number of Hyundai units serving the system to nearly 350.

“The latest order will likely put Hyundai Elevator in an advantageous position in the second and third bidding for Subway Line 3, scheduled at the end of this year and early next year, respectively. The estimated scale of the two projects is about 320 units, which is similar to all previous orders by Hyundai Elevator [combined].”

Hitachi Elevator (China) Co., Ltd. has won a contract to provide 22 elevators and 66 escalators to section 2 of Line 16 of the Wuhan Metro, the company announced in August. Construction of all stations on Line 16 has begun. Line 16 is a high-speed light rail line that connects the Hannan District with Wuhan’s main business districts. It has 12 stations along its 32.4 km (12.7 km of which are underground). Five of the stations are elevated, and seven are below ground. Regular service is expected to begin in 2021.

Hitachi has provided more than 540 escalators to Wuhan Metro’s Lines 2, 3, 6, 7 and 8, including four of its model EX-BPG with a lifting height of 22.4 m, the highest in central China. Officials in Wuhan have made construction of transportation networks a priority for the second half of 2020. Despite the COVID-19 pandemic and serious flooding, construction of the city’s rail transit system has continued.

Mitsubishi Estate’s Tokiwabashi Project had a few floors added earlier this year to one of its buildings, the future tallest in Japan, taking it to a height of 390 m and 63 stories, Japan Property Central reported in September. The addition of two floors was part of an exterior redesign for the tower, slated for completion in 2027. Total floor space also increased by 11%, to 544,000 m2. An expressway adjoining Tokyo Station will now be situated underground, which allows for a floor-area-ratio increase that will bring the total space in the project’s four buildings to 740,000 m2. Included in the plan are office space, a luxury hotel, retail and an observation floor.

Thinking Outside the Box

The Comeback Of The Hydraulic Lift

Large projects are on the horizon for Niagara Falls, Montreal, Toronto, Barrie and Surrey.

A 52-and two 40-story towers slated for Jersey City, Newark.