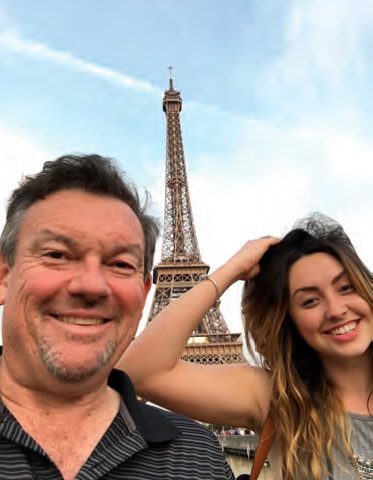 Wilson and his daughter, Alexandra, in Paris where she resides

Vancouver-based consultant looks back on 40 years in the industry.

Andrew Wilson grew up in Kirkland Lake, a small northern Ontario gold-mining town that looks like something out of a Hollywood set. The town mistakenly used gold-bearing ore from one of the local mines to pave Main Street, which contributed to the town’s nickname: The Mile of Gold. “I guess, subconsciously, that could be why I’ve always seen the value in transportation, vertical or otherwise,” says Wilson, who, in 2020, marked his 40th year in the verticaltransportation (VT) industry, the past five with the Vancouver, Canada, office of GUNN Consultants Inc.

During his early years, Wilson had an affinity for math and science and considered a career in forestry. In 1978, he earned a degree in Business from Queen’s University in Kingston, Ontario. He moved to Toronto after college, quickly realizing that big city life suited him. Wilson held a variety of sales jobs, hawking everything from sports equipment to stationery. He loved sales but longed for something more technical.

VT entered the picture when he saw an ad for a salesman at Dover Elevators, applied and got the job. He started there in 1980. Over his 18 years at Dover, Wilson worked in Toronto, Ottawa and Vancouver, where he was branch manager when thyssenkrupp acquired the company in 1998.

At that point, Wilson moved to Schindler as manager of new installations and modernization, a position he held for 15 years. After a brief stint as a project manager at Fujitec, Wilson joined GUNN in 2015. He says he wishes he had done it 20 years earlier, as he considers his job as manager of new construction a perfect fit. He enjoys the fast-paced firm and sharing his industry knowledge with young engineers. Wilson says:

“GUNN is a vibrant, growing, full-service VT firm. When I started, we had eight people in Vancouver and two in Calgary. We now have 18 in Vancouver and five in Calgary. We have separate departments for new construction, modernization and inspections. I recently became a minority shareholder in GUNN, and look forward to being involved as we continue to grow.”

Among career highlights were the Trump International Hotel and Residences in Vancouver, served by 12 Fujitec elevators, in the city’s Financial District, and Metrotower 1, a 28-story office tower built in the late 1980s in the Vancouver suburb of Burnaby. He describes Metrotower 1 as one of the most challenging and rewarding projects of his career. He says of it:

“I sold the original elevators when I was with Dover when the tower was built, and I sold the modernization package 25 years later, when I was with Schindler. The job included the first destination-dispatch system in Canada. Maybe this is how you know you have had a long career — when you start working on modernizations of elevator systems you sold as new. It was exciting to work on the modernization, and destination dispatch was still a very new technology. In fact, the project was even covered on the local evening news as the ‘elevators of the future.”

Another large, interesting project Wilson worked on with Schindler was the SkyTrain rapid-transit Canada Line, which had to be finished for the 2010 Winter Olympics in Vancouver. The project involved installation of 38 escalators and 34 elevators in 16 stations along the new line. Station construction fell behind schedule, putting a squeeze on the VT installation timeline, but Schindler was able to turn all units over to the customer in time for the Olympics.

When your author spoke with Wilson, cities and businesses were just starting to reopen after COVID-19 lockdowns. He describes the pandemic as “certainly the most unusual thing that has happened in my career.” He is grateful technology allowed work to continue throughout the crisis almost as usual. “It would have been a different story if this had happened at the start of my career, when there were few personal computers or cell phones,” he observes. “I don’t know how business could have survived then with the required social distancing.”

Construction and, in turn, the VT industry, have been booming for years in Vancouver and show no signs of slowing down, despite COVID-19, he says, stating:

“We live in one of the most beautiful places on earth, and people are always wanting to move here for the weather, the scenery and the outdoor lifestyle. Being on the coast and adjacent to mountains, land is limited. High-rise projects are the norm. The City of Vancouver has some very interesting restrictions on building heights, due to what it refers to as ‘view cones.’ They are very strict about protecting views of the mountains from certain vantage points around the city’s seawall. We are often challenged to come up with creative ways to reduce or, in some cases, eliminate, the elevator machine room obstruction at the top of buildings, while allowing developers to maximize the number of floors.”

When he’s not working, he enjoys the outdoor lifestyle of B.C. He plays tennis and golf, observing that “golf is fantastic on the West Coast and in the interior of B.C.” When asked about his favorite way to spend a weekend or sunny afternoon, Wilson said:

“I like to get in a sunny round of golf with a few friends before grabbing some crab fresh off the boat. Nothing works up an appetite quite like taking my driver for a stroll, although I prefer saltwater crab to freshwater hazards.”

Wilson loves reading novels, observing that his sister, an avid reader, always has good recommendations. He is currently working his way through Ken Follett’s The Century Trilogy and The Inner Game of Golf by Timothy Gallwey. “The latter is a nice change from the typical golf instructional book,” Wilson says. “It reinforces how important your mental attitude is for improving your performance in not only the game of golf, but also the game of life.”

Wilson is single, with one daughter who lives in Paris. He also has a good friend who lives in Australia and enjoys traveling to both locations as often as possible. He has no plans to retire anytime soon, stating, “The beauty of consulting is that I can continue to contribute my knowledge in a meaningful way, even as I reduce my time at the office.”

The Holy Land Is the Setting for ISO Meetings

25 Years Strong: Looking to the Future With Optimism