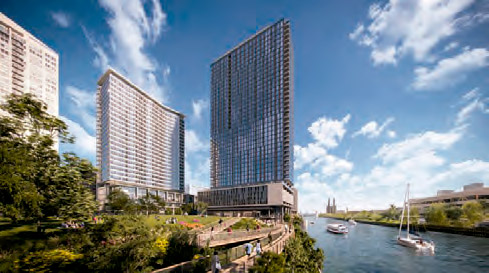 The Reed is on the right; image from Perkins + Will.

The third, 41-story mixed-use tower in Onni Group’s Old Town Park development on the Near North Side (ELEVATOR WORLD, September 2019 and October 2019) was nearing completion in late 2020, with the glass curtain wall reaching the final floors. Located at 228 West Hill Street, the tower includes four Otis elevators equipped with a destination-dispatch system for occupants of 456 apartments, Paul Alessandro, partner with project architect Hartshorne Plunkard Architecture (HPA) told EW. Offices and a sixth-floor amenity deck will be offered. The design includes long rows of balconies with dividing walls between units and a ribbon-like element wrapping around the exterior. Joining two previously completed towers, the structure is slated for completion
this year.

Residential Tower to Integrate With Community

“Elevators treated with a consistent material finish” will serve a 33-story, 375-ft-tall residential tower designed by Solomon Cordwell Buenz (SCB) and developed by The Habitat Co. at 344 North Canal Street in the Fulton River District, the source reported in December 2020. Set to take shape on the site of the Cassidy Tire building, which will be demolished, the tower will include 343 units of various sizes, parking for cars and bicycles and ground-floor retail. The main entrance on North Canal Street will be incorporated with a public plaza and retail. Pedestrian paths will wind through the site to connect North Canal and North Clinton streets, and there will be public art on the adjacent railroad abutments. A construction timeline was not provided.

The 41-story, 440-ft-tall The Reed, the second residential tower in the multitower Southbank, designed by Perkins + Will and developed by Lendlease on 7.5 acres on the riverfront (EW, August 2018), has been revealed, the source reported in December 2020. The Reed follows The Cooper, a 29-story, 321-ft-tall residential tower completed in 2018. For The Cooper, Otis manufactured and installed six passenger elevators (including one larger, freight unit and two serving the parking area), Perkins + Will told EW. Located at 234 Polk Street, the latest building will have 216 condominiums on floors 23-41 and 224 rental units on floors nine-22. Condos will feature floor-to-ceiling windows with views of the city skyline; Lake Michigan; the Chicago River; and a new, publicly accessible park. The Reed’s dark exterior will contrast with The Cooper’s lighter one, while its interiors will boast “an industrial-chic aesthetic” with concrete ceilings and metal finishes. Construction is expected to start in late spring 2021, with move-in in summer 2023.

The developers of 40 West Oak Street have won approval for a 35-story residential tower in the Rush & Division neighborhood, the source reported in December 2020. The 466-ft-tall building will bring 75 homes to the corner of North Dearborn and West Oak streets. Designed by Lucien LaGrange, the tower will replace an existing parking structure but will have a new parking facility in the base of the tower. An amenity floor will provide a buffer between the parking levels and residential floors. Designers plan to meet sustainability requirements exceeding energy code and stormwater management requirements, planting trees, reducing indoor water use, providing bicycle parking and electric-vehicle charging stations, and other measures.
The building has been reduced in size from the original planned 503-ft height and 90 residential units. Developers will also pay more than US$1 million into each of two city initiatives, the Neighborhood Opportunity Fund and the Affordable Housing Opportunity Fund. The project, which will cost an estimated US$165 million, has been approved by the Chicago Plan Commission and has been granted a zoning change. Construction is expected to start this year.