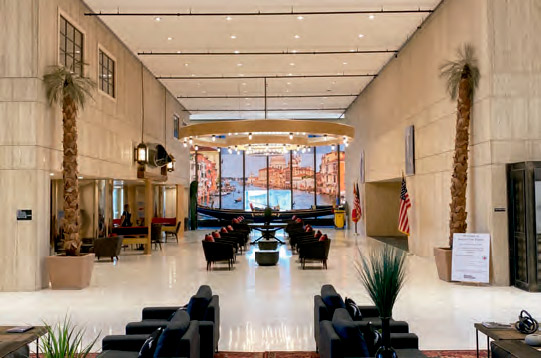 Elevator bank in the refurbished Seneca One; image courtesy of Douglas Development

CEC Approved to Conform With Standards

Additionally, CEC has completed third-party UL air-quality monitoring evaluation. Conducted in Virginia for a monthlong period, the test complemented efficiency testing CEC initially performed on Sterilyft’s ability to remove particulates from the in-cab air. The device has been installed in several cities and is slated for installation in others.

“Now that we have our ETL Label, we have begun the process of introducing Sterilyft as a possible code requirement for reasons of public safety and health on all elevators, as well as petition for leniency or reevaluation of the social-distancing requirements in an elevator, given that up to 95% of possible pathogens carried by contaminants is being removed from the cab enclosure, and 99.9% disinfection of all remaining air is being performed.
“Some future developments for Sterilyft [include] completing testing on a custom high-efficiency-particulate-air-certified filter to increase retainage of particulates in the viral range up to 99%. In conjunction with the possible integration to code, we will be offering an integrated 4-hr emergency power supply to run Sterilyft in emergency operation, as well as integrating an automated smoke damper to detect and automatically evacuate smoke that may be within the elevator shaft that would infiltrate the enclosure’s natural ventilation and door gaps. This would not only be applicable to write into [the] code for health and safety, but also integrate fire safety into an elevator. This is another item that does not currently exist in American National Standards Institute code.”

Otis has commissioned Dr. Qingyan “Yan” Chen, the James G. Dwyer professor of Mechanical Engineering at Purdue University in West Lafayette, Indiana, to lead a study on how elevator airflow affects the risk of transmission of COVID-19 and how to mitigate that risk. Also editor-in-chief of the scientific journal Building and Environment, Chen uses sophisticated 3D modeling in his research, which currently focuses on indoor environments, aircraft cabins and energy-efficient, healthy, sustainable building design and analysis. Chen said the study will aim to help the industry and riding public “better understand the likelihood of COVID-19 transmission in an elevator environment” versus activities like shopping in a grocery store or eating in a restaurant. Otis Marketing & Sales Vice President Robin Fiala said the study promises to “help our customers make more informed, science-based decisions on how to keep their tenants safe.”

The tallest building in Buffalo, New York, at 38 stories, Seneca One opened its doors to apartment residents several months ago following a US$150-million renovation by Washington, D.C.-based Douglas Development Corp., WKBW reported. In addition to remote access and amenities including a food-and-beverage center and a fitness center, the work included updating the tower’s 27-elevator vertical-transportation (VT) system, which Douglas Development told ELEVATOR WORLD was handled by Schindler. The property was built as an office building in 1970, and Douglas bought it out of foreclosure in 2016. Seneca One now has M&T Bank as its anchor tenant, with at least five other commercial tenants signed on. Apartments — a first for the 50-year-old building — total 115.