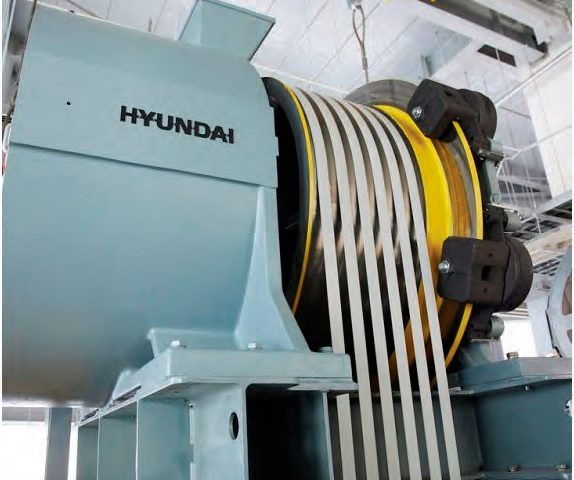 Hyundai Elevator has announced the development of a high-speed elevator using carbon fiber belts instead of traditional ropes, BusinessKorea reported in May. According to the company, the innovation marks the world’s first elevator with carbon fiber belts. It can travel at 1,260 m/min, or 21 m/s. The report said the belt weighs only one-sixth the weight of metal ropes, which the company said allows the new elevator to travel beyond 1,000 m. The report adds that the new elevator can use 30% less electricity than a traditional elevator.

The company said the system’s high inherent vibration frequency enables safe operations during windy or earthquake conditions, and a special coating doubles the life of the belts. The system includes a large-capacity, nine-phase machine that can operate under conditions of partial failure; a controller with a high-speed CPU and real-time operating system; and a streamlined car that reduces air resistance, thus improving ride comfort and stability.

KONE has tapped Johannes Rastas to lead its Services & Solutions R&D team. The team is responsible for KONE’s 24/7 Connected Services and touchless elevator calling. KONE Executive Vice President Maciej Kranz observed Rastas “developed innovative services at a massive scale in the smartphone and financial industries that made a difference for millions of people.” Rastas most recently was executive vice president and head of digital banking at Nordea in Helsinki. His career includes serving as senior director at both Microsoft and Nokia, where he led teams for more than 12 years. Rastas holds a master’s degree from Helsinki University of Technology, where he studied computer science, telecommunications and corporate strategy.

“Elevator owners or those responsible for their safe operation, such as facilities managers, have a legal responsibility to ensure the lift is thoroughly examined and is safe to use. Failure to comply with LOLER could result in an unlimited fine or imprisonment.”

Hargreaves has more than 20 years of experience in the elevator sector. He most recently worked for test and inspection specialist Bureau Veritas and previously held senior engineering and management positions with KONE. His LOLER Inspection Service provides a systematic examination and risk assessment of passenger, goods, service, platform and mobility access lifting equipment. Digital reports will identify any defects and advise on further testing or corrective action to ensure equipment is safe to use. “I am working with a brilliant team of TÜV SÜD engineering surveyors, who have conducted LOLER inspections across every sector of the built environment,” Hargreaves commented.

This spring, Otis Elevator Korea Vice President and Managing Director IS Cho signed the “Partnership for Inclusive Growth and Gender Equality” agreement with the South Korean Ministry of Gender Equality and Family. Otis says it is the first construction company in the country to do so. More than 30% of Otis’ executives are women, including CEO Judy Marks. By 2022, Otis aims to increase this to 35%, with a focus on hiring women in the engineering, sales and maintenance departments. To prevent an opportunity gap, Otis Korea encourages measures such as flexible work hours and partners taking childcare leave.

“Otis has been championing gender equality and inclusive growth through its strategic programs. It signed the agreement to make ‘respect for diversity’ an enterprise-wide culture statement and offers training, workshops, cultural campaigns and mentorship programs to usher in a new wave of culture. Its independent, in-house Women’s Council [promotes] diversity and has hosted programs including mural painting for employees and families to support local communities, bazaars, leadership training and group mentorship to further women’s careers.”

Regarding sustainability, developers and building owners are increasingly aiming for classification under the Building Research Establishment Environmental Assessment Method (BREEAM) standards. An important aspect of their quest is installing elevators that offer favorable performance. “With the designation ‘energy efficient lift,’ the lift manufacturer indicates that it has done everything possible to minimize energy consumption,” says Hessel Kramer, product certification specialist at Liftinstituut. “However, how energy efficient the lift really is depends on the location and other factors.”

As property owners and building managers strive for transparency into their efforts to achieve more sustainable buildings, they are learning how energy-efficient lifts play a role in reducing their ecological footprint. Kramer, who performs dozens of onsite energy audits every year, notes that favorable lift audits yield more BREEAM credits. “At the same time, such a measurement also provides insight into how quickly you can recoup the investment in an energy efficient lift,” he adds. When engaged by a building owner, Liftinstituut says it will complete an inspection and produce an energy performance certificate that lets the owner know how efficiently the lifts are functioning.

Liftinstituut also noted that it recently awarded certifications for two VT products. One is a universal escalator controller from Pro-Engineering that the company says can sharply reduce the time needed to replace a defective escalator controller. The second product, from GENESIS, is a range of landing doors, which are now certified according to the European Lifts Directive and EN 81-58:2018 standard.

A “Marriage” Made in Heaven: Steve Grainer and Mitsubishi Electric US