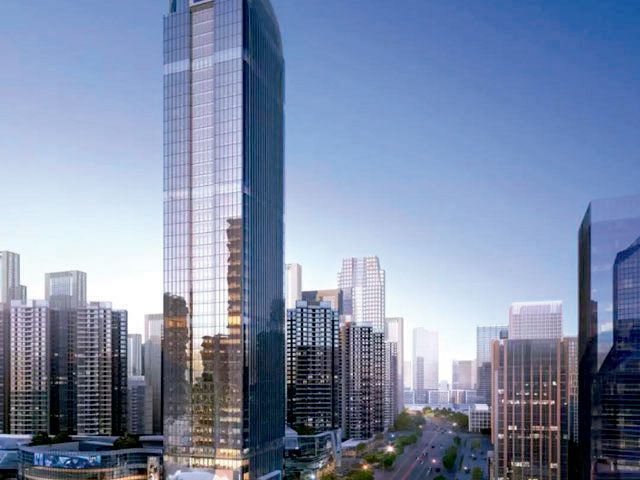 KONE will deliver 107 escalators to the first phase of the Metro Line R2 in Jinan, the company announced in July. Jinan, the capital of eastern China’s Shandong province, has traditionally been a major bus transportation hub, but the city opened its first metro line in 2019, and two lines are now in service. Metro Line R2 will total 36.4 km in length, with most of it — 34.5 km — underground. The 19-station line is expected to become the east-west backbone of the Jinan Rail Transit network, traveling between Wangfuzhuang and Pengjiazhuang, and will connect major areas of Jinan, including the old town, the newer part of the city in the west and the Jinan High-tech Industrial Development Zone in the eastern part of the city. It will also connect to existing metro lines R1 and R3. KONE will equip 10 of the stations, from Shengchanlu to Pengjiazhuang, with 107 TransitMaster™ escalators. The contract also includes two years of standard maintenance. Construction of the line is expected to complete at the end of 2020. Hitachi previously won an order for 118 escalators in nine of the line’s stations (ELEVATOR WORLD, July 2019).

KONE will supply 103 vertical-transportation (VT) units for the second phase of Metro Line 6 in Chongqing, the company announced in August. The OEM will equip the line’s stations with 83 of its TransitMaster™ escalators, and 16 MonoSpace® and four MiniSpace™ elevators. Additionally, the contract includes two years of standard maintenance. Line 6 will create a connection through the Liangjiang New Area in the north of Chongqing. The Liangjiang New Area and its Yuelai district are hubs bringing together international business, exhibitions and conferences, leisure tourism, cultural creativity and ecological living. At a length of more than 14 km, phase two of Line 6 will travel from Yuelai station to Shaheba station through seven stops and connect to three other existing lines of the Chongqing metro system. It is being developed by the Chongqing Rail Transit Co., Ltd. and is expected to be completed by the end of 2020.

Otis China announced the official opening of its new escalator factory in Shanghai, a facility with intelligent manufacturing and advanced automation that meets Industry 4.0 standards, in July. The factory, relocated from South China to its new home in East China, meets Otis’ global quality standards, the company said. It will employ 3D modeling, custom engineering and real-time quality control to enhance both the finished products and the factory’s efficiency. Perry Zheng, president, Otis China, said during a ribbon-cutting ceremony that the factory, which will produce high-performance escalators and moving walks, will serve a global market.

On the heels of the opening of the escalator factory in Shanghai, a top Chinese government official said he hopes the U.S. business community will continue to invest in the nation, despite challenges, Hellenic Shipping News was among outlets to report in August. During a video conference with President of the U.S.-China Business Council Craig Allen and representatives of U.S.-based companies such as ExxonMobil and General Motors, National Development and Reform Commission Vice Minister Ning Jizhe said China is “committed to developing a non-conflictual, nonconfrontational relationship with the U.S. that features mutual respect and win-win cooperation.” Otis China’s Perry Zheng observed the new Shanghai factory “underscores our confidence in the China market.”

Served by 10 Hitachi elevators traveling at up to 6 m/s, Ganzhou Baoneng Center office tower in topped out at 218 m this summer ahead of completion scheduled for later this year, the Council on Tall Buildings and Urban Habitat reported. In addition to the Hitachi vertical-transportation system, the 43-story tower has a lobby with 12-m-tall ceilings and 4.2-m standard floor heights that let in plenty of natural light. An “intelligent fresh-air system” will provide ventilation, and a double-layer curtain wall will protect against noise, heat and glare. The plan includes more than 1,200 parking spaces for tenants. Ganzhou Baoneng Center is being developed by Baoneng Real Estate Development.

Despite the global economic slowdown brought on by the COVID-19 pandemic, hotel, gaming and leisure company NagaCorp says it remains committed to developing Naga3, a massive, US$3.5-billion expansion of the NagaWorld integrated resort overlooking the Mekong River in Phnom Penh, Cambodia, Inside Asia Gaming reported in August. The huge project would add 3,500 guest rooms, 700 table games and 2,000 electronic gaming machines within its three towers: a pair of 61-story buildings and a 75-story skyscraper that would be the country’s tallest. The towers would be connected by a four-level “upper podium” linking the tops of the shorter buildings with the taller one. Two of these levels are planned to house VIP gaming areas, and the others would make up a recreational area, with a rooftop pool and other amenities. The ultimate design is being developed through a collaboration of resort architects Steelman Partners, skyscraper experts Skidmore, Owings & Merrill (SOM) and local architects. The project is expected to be completed in 2025.

An Overview of the Brazilian Lift Market

Living It up in the City