Home » Articles » Elevator World » October 2020 Issue » Paris and Manchester are among busy cities for the industry. 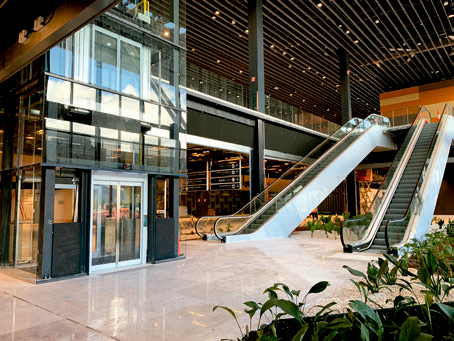 KONE has been selected by Société du Grand Paris (SGP) to provide more than 70 elevators to Line 15 of the Grand Paris Express metro. The 33-km line will pass through 22 municipalities and serve more than 1 million residents as it makes 300,000 trips per day. Working with SGP, KONE will deliver and install a mix of opaque and transparent panoramic MonoSpace® units with energy-efficient EcoDisc® traction technology. The order was booked in the second quarter of 2020, and the line is expected be operational in 2025. “We’re very proud to be involved in this impressive project. . . along this new high-capacity line in one of the busiest metros in the world,” Pierre Liautaud, executive vice president for KONE South Europe, Middle East and Africa, said.

City officials have approved plans by architect SimpsonHaugh for a mixed-use project of two high-rise residential towers joined by a podium with ground-floor retail units, Architects’ Journal reported in August. The towers, standing 52 stories each, are named Blade and Cylinder and will hold 855 apartments ranging from one to three bedrooms. The project, by developer Rennaker, will include 244 parking spaces for residents, a 389-space public parking lot and a new primary school. In granting its approval, the city council said the plan was “well designed” and would “promote a quality neighborhood, economic development and sustainable travel patterns.” The project constitutes the second phase of Rennaker’s Crown Street regeneration development. Blade and Cylinder will stand next to two phase-one towers, also designed by SimpsonHaugh, which are under construction. Those buildings are to rise 21 and 51 stories.

Southvalley Estate, part of MCR Property Group, hopes to start clearing land on the former Gould Street Gasworks site north of downtown by 2022 to make way for the mixed-use Gasworks New Town, World Construction Network reported in August. Including a 33-story tower, two commercial structures, a park and pedestrian and bicycle paths, the development would be built in four phases and bring approximately 1,200 new homes to the market. MCR asset manager Nick Lake said Gasworks New Town would be “transformative” for the Northern Gateway area and that his team has been working closely with the Manchester City Council to advance the plan, designed by AHR and Planit.

The British Council for Offices (BCO) released “Thoughts on Lift and Escalator Design and Operation After COVID-19,” a guidance that emphasizes social distancing and strict hygiene measures for vertical-transportation (VT) equipment as offices reopen, Facilities Management Journal reported in August. Citing government figures, the source said 90% of office-sector decisionmakers are worried about safe use of VT equipment. For lifts, recommendations include reducing the amount of time doors stay open, implementing queue controls, marking where passengers should stand and making controls touchless (operated by apps and foot buttons, for example). Marking where passengers should stand can also be implemented on escalators, along with antimicrobial handrails. Masks are recommended, especially on elevators, and hand-sanitizing stations should be made available at entries and exits of lifts and escalators. The guidance may be downloaded free at

Despite pandemic-related challenges like construction-material delays, Sanken Group is forging ahead with construction of Capitol TwinPeaks, a pair of 50-story condominium towers overlooking Beira Lake in Colombo, Sri Lanka, Daily FT reported this summer. Capital Developers and general contractor Sanken Construction, both members of Sri Lanka’s Sanken Group, resumed construction in May on the property in the Colombo 2 neighborhood. Describing Capitol TwinPeaks as a future “landmark,” they expect it to attract expatriates, foreign nationals and younger buyers. The Singapore office of P&T Group designed the project, which Sanken Group “is committed to financing,” Capitol Managing Director Rohana Wannigama said. A completion date was not provided.

The Complexity of Codes