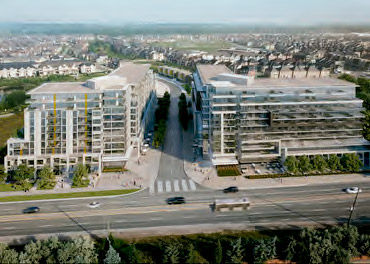 KONE has been hired to provide six MonoSpace® 500 elevators with the Elevator Call touchless solution to Distrikt Trailside, a residential development taking shape in Oakville, a suburb of Toronto. It represents the Canadian debut of Elevator Call, a cloud-based solution allowing users to call an elevator with their smartphones. Also including two-story suites, Distrikt Trailside consists of two 10-story condo towers with more than 600,000 ft2. Construction is expected to start in 2021. Distrikt Developments and Fiera Real Estate are the owners, and Kirkor Architects and Planners provided design services. Bluescape is handling construction management. Distrikt Developments Director of Construction Leonard Scomparin said utilizing KONE Elevator Call will “deliver a safer experience to all of our purchasers.”

Elevators and other mechanical elements are being installed in the south tower of the 49-story, 237.7-m-tall CIBC Square
(ELEVATOR WORLD, November 2018) along Bay Street downtown as the structure approaches its final form, Urban Toronto reported in August. Developed by Hines and Ivanhoé Cambridge and designed by U.K.-based WilkinsonEyre Architects with Adams Associates, the structure is the largest downtown Toronto office project since the 1990s. It will be served by thyssenkrupp elevators outfitted with Captivate digital signage displays (EW, February 2019). Soberman Engineering Inc. consulted on the vertical-transportation system, which also includes escalators down to a new, 10,000-m2 transit facility. As such facilities are considered essential, work was allowed to continue during the pandemic, albeit on a limited basis.

Though site work had started nearly a year earlier, an August groundbreaking marked the ceremonial launch of construction on 55C Bloor Yorkville Residences, the latest high-rise residential building going up on Charles Street East near the Bloor-Yonge subway station downtown, Urban Toronto reported. The 48-story tower, developed by MOD Developments and designed by architectsAlliance, will bring 551 condominium units with layouts ranging from studios to three bedrooms, along with 20,000 ft2 of amenity space. Completion is targeted for fall 2023.

The Parker, a 37-story, 349-unit apartment tower designed by Graziani +Corazza Architects and developed by Fitzrovia Real Estate Inc. at Broadway and Redpath avenues, is quickly taking shape, with concrete forming reaching the halfway point in September, Urban Toronto reported. The source observed the tower represents the “second wave” of rental tower construction along the Yonge corridor that redefined the area in the mid-20th century. Slated for completion in the third quarter of 2021, the building will offer residents amenities including an outdoor rooftop pool, a gym, multipurpose lounge areas and a lobby with a concierge desk. Ground-level retail is also planned.
Exterior construction hoist at The Parker; photo by Urban Toronto forum contributor Albert C.