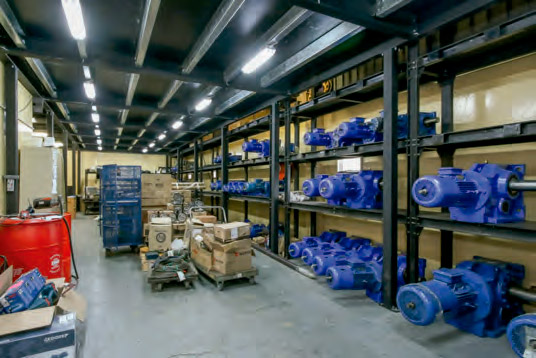 Motors in the Wesant Manufacturing warehouse in South Africa; photo courtesy of Wesant

Myriad hurdles to achieving “Made in Africa” lifts

Africa’s vertical-transportation (VT) industry continues to rely on imported components to meet market demand, with some local lift companies identifying hurdles on the road to developing the manufacturing capacity of domestic small- and medium-sized VT enterprises. Demand for components is expected to keep rising in Africa as widening regional trade and economic integration, rapid urbanization and a growing middle class drives expansion of the construction industry. Fueled by greater investment in commercial, residential and hotel development, new installations (along with related maintenance) are expected to grow, increasing Africa’s appetite for imported lift components.

Some domestic lift companies say sourcing equipment from foreign markets is preferred, as large-scale local manufacturing is still in its infancy and constrained by a lack of production infrastructure, skilled manpower and appetite for investing in the segment due to the huge capital outlay required.

Moreover, small- and medium-sized VT companies in Africa keen on developing quality manufacturing capacity would have to comply with internationally recognized quality- and safety-related codes and standards for locally fabricated components. “For example, European countries use the ‘CE’ conformity system, and, although there is no direct equivalent in East Africa, European norms are generally used as a point of reference,” Ian Blackman, managing director (MD) of Kenya-based Elevator Concepts Ltd., observes.

As chairman of the Kenya Bureau of Standards’ Technical Committee, Blackman is aware that European standards, particularly EN 81, have been adapted locally, but a lot more alignment and integration is needed to ensure safety and quality standards are met and maintained, he states. “Lifts and escalators are, of course, passenger-carrying systems, and codes are a critical issue; however, this would probably require significant development to achieve a fully functioning quality control system,” Blackman says.

Most international VT companies with either distribution outlets or subsidiaries in Africa — such as Otis, Schindler, KONE and Mitsubishi Electric — have an advantage over local small- and medium-sized companies when it comes to securing international standardization certificates and marks due to their size and availability of resources to apply and pay for the processes.

Wareing says that, although Wesant has the capacity to make and supply sheetmetal for elevator panels, steel frames, bases and other components, the tendency in Africa is to buy imported components. This makes any attempt to ramp up local production a huge business risk. Wareing states:

“Lift component buyers in Germany are happy to buy ‘made-in-Germany’ products, as [such buyers] are in Italy and other big lift markets. This is partly because these economies have the ability to spend a little more on manufacturing, unlike in Africa, where the region’s economies are hardly in a position to pay anything more than [the minimum] a lift manufacturer needs for production. For example, in South Africa, the government can support the ‘buy local’ mantra, but probably less than 5% of target lift consumers respond positively. The majority focus on their target, which is to move passengers or goods in as affordable a manner as possible. There is no passion for buying locally fabricated or manufactured goods like there is in bigger markets like Europe and North America.”

For other imported goods, African governments tend to impose restrictive tariffs to protect local manufacturing. This is not to be the case, however, for lifts and lift components. For Africa’s VT industry to thrive, its construction industry has to grow, adds Wesant General Manager Andrew Janssens. This creates something of a catch-22. “If African governments impose import tariffs to protect the local lift industry, construction will be directly impacted, because the projects will end up being more expensive,” Janssens points out. African governments, he says, will be forced into a balancing act that involves ensuring new buildings are affordable to stimulate construction growth, while protecting the still-small component-manufacturing sector by imposing tariffs. This is not sustainable, he says.

The majority [of VT-equipment customers] focus on their target, which is to move passengers or goods in as affordable a manner as possible.
— Wesant Manufacturing MD Wade Wareing

“An African government eager to protect its local lift-manufacturing industry would have to suspend importation of lift components from China as it scales up local production capacity, which is basically impossible; therefore, local and Chinese lift components would have to compete on price.”

Since developers in emerging markets tend to contract with lift companies able to deliver VT equipment in the form of single units, local small and medium-sized competitors are unlikely to play a major role, says Markus Mannig, head of export sales at MEILLER Aufzugtüren GmbH. Property developers award contracts to their preferred lift providers with the objective of having those providers assemble and install the equipment, Mannig says.

Furthermore, adds Blackman, “it is technically possible to purchase all the lift components and equipment separately, such as the hoisting machine, guide rails, ropes and controllers.” This is only carried out on a large scale by companies that then sell the assemblies as complete lift systems, he observes. “If someone were to purchase a single set of parts to make one lift, they would need to buy from spare-parts suppliers and it would cost much more than buying a complete lift system from a single supplier,” Blackman says.

Elsewhere, Mannig says the tendency to have a well-established lift company carry out assembly and installation is influenced by the advantage of “all possible interface problems among the different components suppliers being easily sorted out by the lift company (in most instances, the manufacturer) beforehand so there is one certificate for the whole lift.”

Felix Sango, responsible for German elevator component manufacturer SCHAEFER GmbH’s African market, says the decision of whether to buy local or import is likely to be determined by several factors, including:

Developers, especially of large properties, tend to select VT providers with adequate resources, he says. Decisions are made against the backdrop of future eventualities, such as service and support, maintenance, warranties and availability of spare parts, Sango says. Overall, he says, the advantage of using a complete package from a major OEM boils down to the convenience of dealing with one company, as opposed to coordinating business among multiple ones, and: “While Otis and KONE, for example, will offer standard and cheaper equipment in complete packages, a smaller company will focus on delivering higher quality but will most likely [charge more].”

Many small and medium-sized lift companies in Africa want to reach a phase where it is feasible to set up manufacturing/fabrication plants to provide equipment including components. “This would create significant employment opportunities, and I would envisage Kenyan manufacturers, for example, supplying east and central African markets (and beyond) if the relevant quality and safety codes could be set up and aligned,” Blackman says.