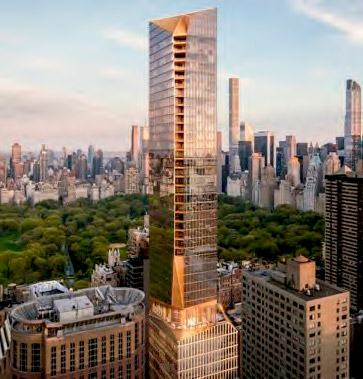 Despite the social and economic upheaval brought on by the COVID-19 pandemic, the second quarter (Q2) of 2020 saw continued growth in the NYC housing-construction market, New York YIMBY reported in July. During this April-June period, 476 new building permits were filed, accounting for 9,309 residential units. Though this marked a decrease from the 12,123 filings for Q2 2019, it was still significantly higher than the 7,010 recorded over the same period of 2018. Total building permit filings cover nearly 30 million ft2 of new development, with nearly half residential and one-third commercial. Structures range from one- and two-story buildings up to a 47-story skyscraper planned in Brooklyn. About two-thirds of the 340 residential projects were multifamily developments, meaning that denser projects remained dominant in the category. Meanwhile, there were only 33 commercial projects listed, which may reflect developers’ concerns egarding work-from-home arrangements that have gained favor among some companies in the wake of the pandemic.

The large-scale conversion of a longtime warehouse at 520 West 20th Streetin NYC’s West Chelsea neighborhood into high-end offices was nearly complete in July and set to go on the market, Commercial Observer reported. The building was purchased by the Haddad family in the 1970s asa warehouse for their clothing-manufacturing business, Carolina Manufacturing Co., when it had elevators large and powerful enough to move semi-trailer trucks. As the neighborhood began to gentrify, the Haddads rented it to a car-parking business. James Haddad, who worked in the building as a teenager, began planning to redevelop the building in 2013. Elijah Equities, the Haddad family’s real estate business, undertook a complete transformation of the structure, placing a three-story addition at the top that adds 50 ft to the building’s height. Two new cores were added — one for elevators, the other for stairs — and a setback between the old building and the addition creates a 7,000-ft2 patio for the fifth floor. There will also be a deck on the new rooftop.

The building totals 100,000 ft2 of space, which was expected to be ready for leasing in August or September. The real estate company managing the property was hoping to strike a deal with a tenant for the whole building, which has been outfitted with touchless access doors and elevator operation, as well as hospital-grade ventilation filtration. The renovation was designed by architect Morris Adjmi.

A joint venture (JV) between Extell Development Co. and global investment firm Tennor Holding B.V. will allow work to resume at 50 West 66th Street (ELEVATOR WORLD, February 2018), New York YIMBY reported in July. Once complete, the 775-ft-tall residential tower will be the tallest building on NYC’s Upper West Side. Foundation work began in 2018, but construction at the site stalled in late 2019. While Extell, the original developer, announced the JV, it did not detail the financial aspects. The building will offer 127 condominiums, plus such amenities as an indoor pool, a full-sized basketball court, a bowling alley, a business center and a landscaped terrace with fire pits and a spa. The site is near Central Park and Lincoln Center, landmarks that architect Snøhetta says influenced the building’s design. Building materials will include natural-colored limestone, bronze cladding, glass curtain wall and a tapered crown. A construction timeline was not announced.

NYC’s Metropolitan Transportation Authority (MTA), reeling from financial problems caused by the COVID-19 pandemic, has indefinitely frozen billions of dollars’ worth of upgrades to the transit system, including elevator installations at subway stations, The City reported in June. In March, MTA announced a 60-day hold on capital projects but has extended that action as it tries to secure US$3.9 billion in emergency federal funding. The system took an enormous hit in fare revenue because of lost ridership during the city’s lockdown. The freeze includes the yet-to-be-funded US$51-billion 2020-2024 capital budget. Planned elevator installations at more than a dozen stations have been put on hold, and a total of 66 stations are not yet in compliance with the Americans with Disabilities Act. In addition to fiscal problems, pandemic-related worker shortages have thwarted MTA improvements. Aside from the elevator work, frozen spending includes signal modernizations, structural repairs and purchases of new subway cars and buses.

Ismael Leyva Architects created renderings revealed by New York YIMBY in July providing a look at an upcoming mixed-use tower at 606 West 30th Street between Hudson Yards and West Chelsea. Perhaps most striking is a rectangular cutout on the northern elevation, behind which appears greenery illuminated at night behind a more-than-five-story piece of suspended glass. The 545-ft-tall tower is set to include 192,780 ft2 of residential and 14,240 ft2 of commercial space. Also on the drawing board are a four-story podium clad in floor-to-ceiling glass, a residential lounge and an indoor swimming pool that boasts views of Hudson Yards and the Hudson River. The developer is Lalezarian Properties. A completion date had not been announced.

After a short pause, construction on the 38-story, 320-room Marriott Residence Inn at 215 Pearl Street in the Financial District (EW, October 2016) has reached the closeout phase, New York YIMBY reported in July. The well-known hotel team of architect Gene Kaufman and developer Lam Group is behind the project, which will offer a mix of studios and loft-style terrace suites, a 24-hr fitness center, a restaurant/bar, a communal lounge and meeting rooms, all within 165,655 ft2. Brown bricks and a white, cement-like material make up the façade. General contractor The Rinaldi Group said in July it was 70% complete with public spaces and was focusing on interiors.

A developer has filed permits for a 40-story mixed-use tower at 111 Willoughby Street in Downtown Brooklyn, NYC, New York YIMBY reported in June. The Michaels Organization, under the name 111 Willoughby Developer LLC, is listed as the company behind the applications. The site, located between Bridge and Duffield streets, is a short walk from the Jay Street-MetroTech subway station. The proposed 434-ft-tall tower would have 195,168 ft2, with 153,425 ft2 designated for residences. There would also be 20,665 ft2 set aside as a community facility and 1,814 ft2 of commercial space. The concrete structure would have 227 residential units, which, at an average of 675 ft2, would likely be rental apartments. The permit application also calls for a cellar but no parking. A church building  on the site would have to be demolished, but permits for that work had not yet been filed. A completion date has not been announced. The architect of  record is GF55 Partners.

A Beacon On The Riverfront