Here for the Beer 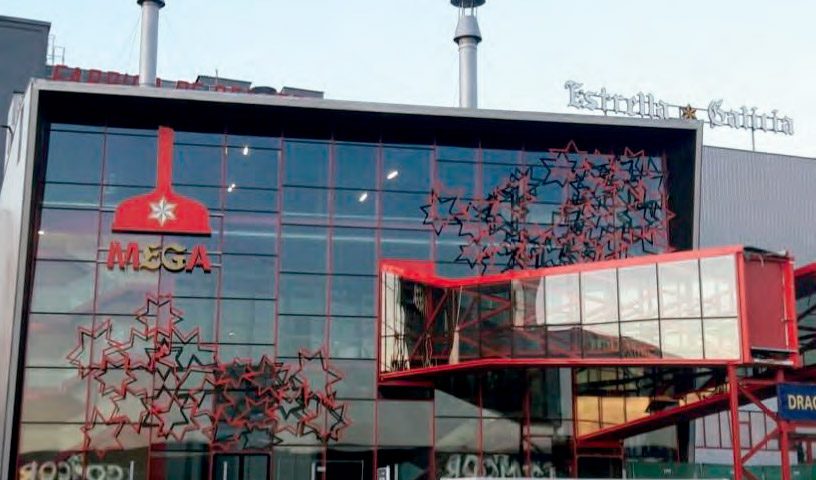 The museum as work was ongoing.

The Estrella Galicia World MEGA Museum, located in the old boiler room of the A Grela brewery in A Coruña, Spain, is a 3,000-m2 exhibition space dedicated to beer and the process of brewing. MEGA is an experience divided into three floors, an exhibition space of 2,500 m2 devoted to the world of brewing —specifically, the more-than-a-century-old brewery Hijos de Rivera, founded in 1906 and still managed by its founding family, now in its fifth generation. Though this space is now dedicated to museum exhibitions, it maintains the building’s original spirit as a brewhouse. This provides visitors with a special and original experience through which they can learn the value and cultural significance of beer through a brand with more than 110 years of history and experience in brewing.

Transformation of this space called for the installation of two escalators, for which thyssenkrupp Elevadores was contracted.

The project consisted of the design, manufacture, supply, installation and commissioning of two custom Velino 300 escalators, manufactured entirely at thyssenkrupp Norte’s facilities in Mieres, Spain. The stairs were tailored specifically for the customer, as they have a special top support with a 137° angle and a structural lattice that supports large, glazed side panels. In addition, they include interior lighting with automatically changing red-green-blue colors synchronized with skirting board lighting — one of the first such implementations in Spain. The work was contracted in April 2016, but it did not start until mid-2017.

Velino 300 was thyssenkrupp’s choice for this project because it represented an improvement on the project specifications: it brought multiple advantages over the installation of a traditional escalator due to its ability to adapt to the 137° angle where the stairs intersect with the walkway construction.

Assembly of the equipment required the team to adapt to the physical limitations of the building. The machines were inserted through the latticework of the façade in accordance with the planning of the main renovation work, and any obstacles were handled in coordination with the other trades on the job.

The escalators were each supplied in a single section and were transported from the Mieres factory to MEGA on a special platform. All the material was unloaded inside the building in a single day using an autocrane, and the units were brought to their respective positions on electric pallets.
Vertical-transportation contractor thyssenkrupp SLU worked closely with equipment manufacturer thyssenkrupp Norte and general contractor Dragados, S.A. to ensure a proper installation. The project architect was Federico Soriano, and the thyssenkrupp project team was led by your authors.

key accounts manager for thyssenkrupp Elevadores Spain, has more than 21 years of experience with the company in various positions related to customer management, mainly as sales manager. He has managed large clients, including the city councils of Bilbao, Vigo, San Sebastián and Santander, and large construction companies, such as Dragados, Ferrrovial and Sacyr. He has also managed large infrastructure and urban accessibility projects, shopping centers, and metro and airport projects. He holds an Industrial Engineering degree from the Polytechnic University of Madrid.

Juan Pablo Onrubia Ayuso, special assemblies manager, has been with thyssenkrupp for more than 25 years, having installed hundreds of escalators in all types of buildings and centers, such as the metros in Madrid, Lisbon, Bilbao, Valencia, Barcelona, Málaga, Madrid-Barajas and Seville, and the Málaga and Lisbon airports. He has also worked on urban accessibility, including projects in Bilbao, Santander, San Sebastián and Barcelona, and in commercial buildings in Seville, Lisbon and Zaragoza. He is an aeronautical engineer with a degree from the Polytechnic University of Madrid.

The World of International Standards