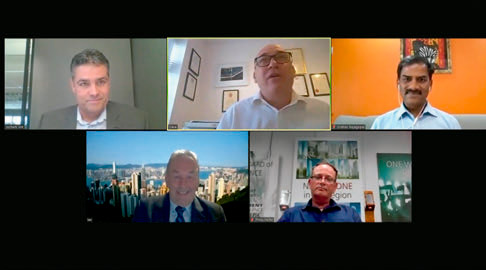 Forced to move to an online format, the 11th Symposium on Lift & Escalator Technologies proved a success, nonetheless.

Forced by the pandemic to move online for the first time since its inception, the 11th iteration of the Symposium on Lift & Escalator Technologies, held September 23-25, was a new experience for speakers and delegates alike, but the format proved to be a great success: the event’s 377 registered delegates, from 38 different countries, were double the usual in-person attendance.

Instead of being in front of a packed room of delegates, sessions were conducted over video link with questions submitted in advance and via chat. Presiding over the symposium’s opening were Dr. Stefan Kaczmarczyk of the University of Northampton and Dr. Richard Peters of Peters Research.

The opening session, chaired by Dr. Rory Smith of the University of Northampton, focused on energy and equipment. To kick off, Dr. Lutfi Al-Sharif of the University of Jordan presented a “drag-and-drop, modular” model for energy consumption. This uses programming language MATLAB and its Simulink tool to create a model with energy components, such as motors and variable-frequency drives, as well as mechanical components.

Kaczmarczyk then presented a novel system that employs a combination of fuel cells and photovoltaic panels to efficiently generate electricity for use by the elevator system, while storing surplus energy.

The session ended with questions for the panel from the audience.

The second session was a panel discussion your author chaired on the future of standards in the lift industry. The session consisted of five short presentations on a range of standards topics:

The second day opened with a session on technology, chaired by Peters. The first paper, from Smith, addressed IoT, questioning whether it is “magic” or a “myth.” He evaluated the effectiveness of IoT products applying current technology and reviewed solutions available to both the multinational lift companies and regional/local lift enterprises.

The second paper, by Yantai Luo of Shanghai Mitsubishi Elevator Co., reported on AI technology that enables automatic detection of a fall and reverse walking on an escalator. Unfortunately, Yantai was unavailable to present his paper, so Peters presented on his behalf, and escalator accident expert David Cooper of LECS UK Ltd offered insights into the application of this technology during the question-and- answer session.

Next was a session with an engineering focus, chaired by Kaczmarczyk, during which three papers were presented addressing a range of engineering problems in the context of lift system design and behavior. The first was presented by Jaakko Kalliomäki of KONE, Finland. He outlined the development and key features of the computational environment for simulating the influence of building sway on the dynamic behavior of lifts in high-rise buildings. Next, Yosuke Shima of Tokyo Denki University, Japan, summarized the results of a numerical study and experimental investigation into lift car vibrations induced by imperfections of the guiding system. The final paper was presented by Shafqat Rasool on behalf of Mohammad Ghaleeh of the University of Northampton. The paper dealt with “Computer-Aided/Finite Element Analysis of a Lift Car — Frame System.”

The presentations were followed by a question-and-answer session covering a range of engineering topics.

Not surprisingly, the final session of the day, a panel debate on the lift industry and COVID-19, generated many questions. Cooper chaired the panel, joined by Ian Smith, Jochem Wit, Philip Hofer and Sridhar Rajagopal. Populations and operational methodology of buildings were discussed, and opinions were expressed regarding the possibility of future building plans moving away from the high-rise model. The way people live and work was also discussed. The consensus was that our lifestyles have changed permanently.

The big question post-COVID-19 is, “Will buildings need more lifts to achieve satisfactory traffic handling?” It was generally agreed that newer systems, such as double-deck and multi-car installations, are likely to be the way forward.

The methodology of how calls are placed on a lift system was also debated. It was agreed that the future is likely to see widespread adoption of systems using apps on smartphones, where the user places a call for the lift or even books a lift car in advance. This created discussion about security and how those who don’t have access to such technology — or those who simply visit a building — will be accommodated.

Cooper summarized: “We are in a world where the real outcomes are not yet known, but, nevertheless, with ‘necessity being the mother of invention,’ COVID has made the industry think hard about the future.”

The third day started with an interesting session that spanned three concepts: safety, escalators and earthquakes. The first paper, by Kazusada Natsu of Tokyo Denki University, discussed the effect of earthquakes on the integrity of escalators and the effect the failure of the escalators would have on the ease of evacuation from the building. The experiences gained from recent earthquakes were used to assess the probability of the escalator falling. Natsu used graph theory to understand evacuation options and how people would still be able to evacuate.

Cooper has spent years researching and investigating passenger accidents, especially on escalators. During this segment of the symposium, he talked about the effect of passenger behavior on causing accidents on escalators, with a distinction between intentional and unintentional misuse. To illustrate, he shared photographic and video examples of passenger-caused escalator accidents.

The session’s third paper, by Nayuta Sudo of Tokyo Denki University, also looked at the effect of earthquakes on escalators. His presentation attempted to quantify the probability of an escalator falling off its fixing points under certain conditions in the framework of the requirements of new Japanese standards.

A question-and-answer session followed that included questions about the effect of earthquakes on the integrity of escalators, as well as the most appropriate height of the handrail to prevent passenger falls over the sides of escalators.

The fifth and final session of the symposium focused on “Traffic and Control” of elevators, chaired by Rory Smith. The session comprised four presentations given by, in order, Matthew Appleby of Peters Research, Mikko Kontturi of KONE, Al-Sharif, and Tiina Laine, also of KONE.

Destination group control systems are becoming an important part of modern traffic systems. Kontturi presented a design of call-registration devices that can also be used to profile the detailed data they can collect.

Laine, the final speaker, discussed the results of three building surveys undertaken to understand car capacity factors and how they are dependent on car size. The surveys used sensors installed inside the car to automate the collection of data.

The session ended with a lively question-and-answer session about the potential application areas for Monte Carlo simulations in elevator traffic analysis, as well as passenger behavior modeling in traffic systems and how group destination control systems deal with passengers who do not enter their floor number with the call registration (“piggybacking”).

In their concluding comments, Kaczmarczyk and Peters thanked attendees; the authors, presenters and panelists for their papers; and the organizing team for making the online symposium run smoothly. Noting the benefits of an online symposium (not the least of which was the saving of carbon emissions), they said they look forward to meeting again physically but, until then, would work to build the symposium community online. More information and announcements will be posted at liftsymposium.org.

Managing Director of the Lift and Escalator Industry Association (LEIA), where he has worked since 2012, and has been in the lift industry since 1992. He was in the inaugural cohort on the MSc in Lift Engineering from the (now) University of Northampton, from which he graduated in 2002 and where he is an Associate Lecturer on the MSc and visiting fellow. Mellor sits on the British Standards Institution’s (BSI’s) MHE/4 lifts, hoist and escalator committee, where he has been involved in the development of various British standards. He is a BSI delegate to various European (CEN) and International (ISO) working groups, including those looking at firefighters’ lifts and lifts for evacuation. He is the principal author of two chapters of CIBSE Guide D and has published a number of papers. Mellor holds a BSc in Engineering from Imperial College, London, an MBA from Brunel University/Henley Management College and an MSc in lift engineering from the University of Northampton.