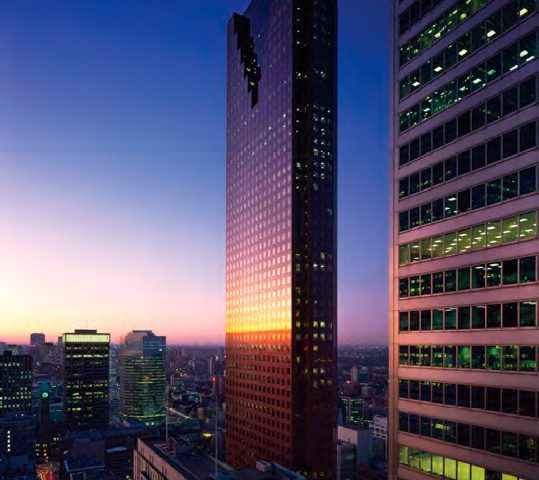 With a modernized VT system from Schindler, Scotia Plaza is a landmark on the Toronto skyline; image courtesy of WZMH Architects.

Residential, commercial and retail construction in Canada’s three largest cities — Toronto, Vancouver and Montreal — is fueling the verticaltransportation (VT) industry. Trends of seven years ago — urbanization, speculative real estate activity and mixed-use construction with a heavy residential component (ELEVATOR WORLD, October 2013) — persist, despite there being a pause due to COVID-19. This pause is widely regarded as temporary, and work that started before the pandemic is chugging along, albeit with new precautions in place.

“Cities such as Toronto and Vancouver have been in a construction boom on both the commercial office and residential sides that far exceeds that of larger cities south of the border.”
— Rob Isabelle, chief operating officer, KJA Consultants

As cities grow outward from their centers, so do their public-transportation systems. This means new transit stations served by elevators and escalators. All this is keeping OEMs, suppliers and consultants busy. Rob Isabelle, chief operating officer at KJA Consultants, Inc., which has offices in Calgary, Montreal, Ottawa, Toronto and Vancouver, states:

“The Canadian elevator industry was certainly firing on all cylinders prior to COVID-19. Although having a population roughly 10% of that of the U.S., cities such as Toronto and Vancouver have been in a construction boom on both the commercial office and residential sides that far exceeds that of larger cities south of the border.

“While new construction has not been overly affected by the pandemic, we certainly cannot say the same about modernization. The majority of modernizations has been placed on hold, and very few new projects have been awarded in the last three months (as of June).”

“The higher the building and the faster the elevator, the more we want that project.”
— Schindler Canada President Lisa Konnry

Schindler Canada President Lisa Konnry says that, other than the current “holding pattern,” business is strong nationwide. A Canadian who has spent her entire career in the VT industry, Konnry joined Schindler in 2016. She believes the nation and, in turn, the VT industry, will emerge stronger than ever from COVID-19. She says:

“We really believe COVID-19 has been a reminder of how great a nation Canada is in which to live. Our healthcare system is remarkable, and our social safety net is one of the best in the world. I really believe there is going to be a lot of world money coming into Canada. Schindler continues to see high bidding activity across Canada, especially in Toronto, Vancouver and Montreal, our three largest cities. We’re not bidding the entire market. Instead, we are targeting our ‘sweet spots,’ which are tall buildings served by fast elevators. The higher the building and the faster the elevator, the more we want that project.”

Schindler was awarded the VT contract for National Bank tower in Montreal, which allowed the OEM to showcase its double-deck elevator technology. In addition, Schindler successfully completed a modernization including double-deck units and destination dispatch at the Scotia Plaza commercial office tower in Toronto.

Transit work is brisk throughout the country. Réseau Express Métropolitain (REM), a 67-km light rail system with 26 stations linking downtown, the airport and the greater Montreal area, is generating work for OEMs, including Otis. With anticipated completion in 2023, REM will be served by 82 units, including 49 Gen2 elevators, 24 NPE escalators and nine other units.

In addition to installing new elevators across all market segments, especially tall towers, Schindler’s Canadian business is driven by infrastructure escalator projects, Konnry says. Toronto is, by far, the busiest market, she adds. In addition to VT systems for tall towers, the OEM provided 43 escalators for the Toronto subway’s extended service to the northern suburb of Vaughan, which is growing quickly, 41 escalators for the Ottawa Light Rail Transit (LRT) system and 50 escalators for an LRT extension being undertaken by Société de transport de Montréal.

Suburbs Come Into Their Own

The trend of Canadian suburbs coming into their own with distinctive skylines continues, observes Council on Tall Buildings and Urban Habitat Editor-in-Chief Daniel Safarik, who says:

“With respect to Toronto, it’s not just Mississauga, but much of southern Ontario. Vaughan is building an entire new city center around its subway extension. Barrie, much farther north, has approved two buildings taller than 100 m. London, Kitchener and Waterloo have active high-rise scenes as well. In general, it has become the norm for Canadian municipalities to plan and approve high-rise buildings as part of their housing supply.”

In downtown New Westminster, a Vancouver suburb, Otis is providing a total of nine elevators to the 53-story Pier West 1 and 43-story Pier West 2, which together will offer more than 660 condominiums. Developed by Bosa Development and designed by Hossein Amanat Architect, the towers will be served by eight SkyRise elevators with capacities of 2500 or 1200 lb and speeds up to 1000 ft/min or 1200 ft/min, and one Gen2 machine-room-less (MRL) unit.

In North York, a suburb of Toronto, Schindler was awarded Central Park, a project by developer Amexon taking shape on 50 acres of greenspace on a public train line. It will include one office and four condominium towers, which will be served by 15 Schindler high-rise 7000 and three midrise 5500 elevators.

Meanwhile, back in city centers, skyscrapers continue to multiply. Due to mountains and water, both Vancouver and Toronto have land restrictions that force higher construction, and new supertalls are being pitched. Two of the most recent are an 87-story, 1,063-ft-tall mixed-use skyscraper designed by Swiss firm Herzog & de Meuron — its first in Toronto — for what developer Kroonenberg Groep called “an iconic block” in the city’s Yorkville neighborhood (p. 44) and a slightly shorter one by Hariri Pontarini Architects (EW, May 2020).

Before those buildings rise, The One, at 309 m and 89 floors, will take the title of Canada’s tallest building. It will include more than 400 condominiums, along with stores and a hotel. Rising at Bloor and Yonge in downtown Toronto, it will be served by 26 Otis elevators, including four SkyBuild units that will be converted to high-speed, high-rise elevators upon the building’s completion (targeted for 2023). The high-rise cars will have speeds of up to 1,600 ft/min and capacities up to 3000 lb. The One was designed by Foster + Partners and Core Architects, and is being developed by Mizrahi Developments. “We’re very proud to be handling this project,” Otis Canada Director of Sales Jordy McMillan says.

In Montreal, Otis is providing VT equipment for Victoria sur le Parc, a 56-story, 200-m-tall tower that will be among the city’s tallest. Containing more than 400 condominiums and scheduled for completion in 2023, the property is being developed by Broccolini and was designed by Beique Legault Thuot Architectes and IBI Group Architect. It will be served by a mix of Otis elevators, including:

Tall-building business remains brisk for OEMs, with Konnry describing major jobs in Montreal and Toronto. She says the company recently provided the VT system for National Bank’s new CAD500-million (US$365-million), 40-story headquarters in downtown Montreal that includes 32 escalators and elevators, of which 16 are 7000 double-deck units. In downtown Toronto, Schindler was awarded the VT contract for the new Hospital for Sick Children Patient Support Centre. The VT system will have 15 elevators with PORT destination dispatch, including seven 7000s and eight 5500s. “We are very proud to be partnering on a project that supports the amazing work of the world-renowned Sick Kids Hospital,” Konnry says.

The trend of Canadian suburbs coming into their own with distinctive skylines continues.

Schindler is finalizing the modernization of Scotia Plaza in downtown Toronto. The OEM originally installed the double-deck elevator system in the tower in the 1980s, and now, nearly 40 years later, PORT is being added. Notably, the project includes replacing the double-deck units, making it one of the largest and most complex modernizations in the world. It consists of:

KONE Canada’s work spans residential, office, medical facilities, retail and infrastructure “that includes airports and metros that help improve the flow of urban life,” Leitch says. Mixed-use high-rise projects that bring offices and retail together have been a particular area of focus lately, he says.

Such work is generating jobs for Canadians, although perhaps not so much at the moment. KJA’s Isabelle says the firm had been hiring “right up until March” but has put future hiring plans on hold until there is more clarity on the impact of the pandemic. Meanwhile, KJA is handling “a large number” of jobs, including a 50-plus-car modernization and several new VT systems for office buildings.

“Aside from a temporary bump due to the coronavirus pandemic, the Canadian market remains strong. We are already seeing signs of a quick bounceback, and we anticipate medium-sized business to continue to play a big role in new growth. Across Canada, we also see stable real estate prices and some trends pointing toward increases over the coming years.”