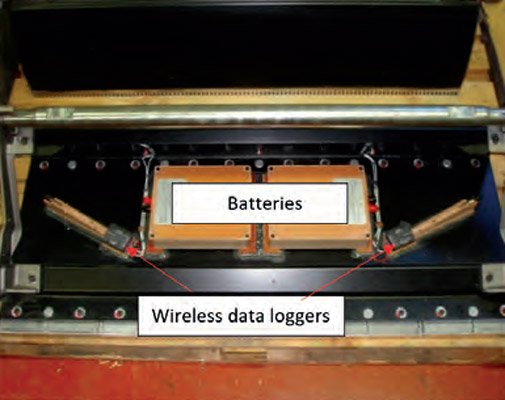 Part one of this series[3] showed and proved the fractal nature and behavior of data collected from the smart step, which is run in an escalator without the effect of passenger loading.[1 & 2] The systematic, consistency and repeatability features of the data have proven that they have fractal patterns and characteristics.[2] The fractal values can be used as a tool to recognize the escalator fingerprints during normal and
up-normal operation conditions. Up-normal operation conditions could manifest themselves during usage. Examples are the mechanical degradation of components in the mechanical system or a mechanical failure.
This article will show the impact of passenger loading on the fractal nature of the data from the smart step. It will show the escalator behavior during passenger loading, compared to the free loading condition. The core element this article is trying to answer is, “Would the pattern of the fractal behavior, established in Part 1, change when there is a passenger loading effect?” This study answers, “Yes; the patterns and signals profiles change by 3-10%, compared to those of the unloaded conditions. As expected, the main change in the profile of the signal is on the main passenger side of the escalator.
The analysis of a series of traces of data over time from machines has deep history. Studying the historical trends of various parameters in a machine against time shows the complex nature and behavior of the machine. More to the point, this history can guide designers and maintainers to deal with the mechanisms of the machine in a dynamic way, as the machine behavior changes with time due to wear and tear or mechanical failures.

A Scientific, Systematic Look at Behaviors and Patterns

Despite the complexity and accurate setup required for an escalator to run safely, escalator behaviors and patterns have never been looked at in a scientific and systematic way. For the last 10 years or so, we have been trying to change this culture with the help of our smart step. In previous publications,[1-3] we established that data from the smart step have the pattern of being consistent, systematic and repeatable. The data can act as a fingerprint indicator for the quality of design and pattern of operation for escalator A, compared to escalator B, for example.
In another study,[3] we determined the fractal dimension (Df) values for different traces. The values of Df can be used to determine how smooth and stressed a specific escalator design  is, or how good or bad a maintenance regime is. Indicative linear relationships were derived between the Df values and stress levels generated from the smart step. These stresses could be correlated to potential mechanical issues or failures in the escalator. Similar principles can be used on any other mechanical machines or electronic assemblies.
The basics of studying traces from electronic products and assemblies are not new. Many publications[4-7] have tried to discover the fractal nature of the signals from electronic assemblies and products. The aim of those studies was to develop efficient and effective digital output signals to quantify the behaviors of those systems in fractal models. Fractal models have made a major impact in the area of communication, particularly regarding a computer data network. Several studies have demonstrated that the network traffic loads exhibit fractal properties.[7-9] Next, we will continue to understand the fractal nature of the data from smart step when passenger loading is considered.

Per our previous study,[3] the scaling step technique has been used used here to determine Df. A computer program was written in Microsoft Excel to determine Df and plot the data. Our methodology is very similar to the Multiresolution Length Method, which has been used by many researchers.[10-12]
The steps in the time series (s) = {s(0), s(1), s(2), s (3), . . .s(n)} of length n of the trace. Each point in the plot is represented in (xi, yi) when i = 1, 2, 3, . . .n. xi values are abscissa, and yi values are ordinate values. The Euclidean distance between two points (x1, y1) and (x2, y2) is:
dist(s1, s2) = ((x1 – x2)2 + (y1 – y2)2)0.5 (1)
The total length of the curve of the first-time resolution is calculated as:
L = I = 1∑n – 1 dist(si, si + 1) (2)
It is noted that, as the resolution becomes coarser, the estimated length of the time series becomes less accurate. Repeat the above for different resolutions (r) = r1, r2, r3, r4, . . .rp, where rp is the maximum coarsest resolution at which the length of the curve is calculated. By drawing a log-log graph (1/rk) versus (Lr) and computing the slope, Df is calculated from:
Df – 1) = -[log(Lr)/log(1/rk)] = -[slope] (3)
A smart step was built to run in a newly, fully refurbished escalator. The escalator was run with passenger loading. The passenger density was not high. Eight strain gauges were mounted at different locations in the step (Figure 1). The gauges were located at critical locations in the step after conducting finite element analysis simulation on a 3D model for the step. The step was loaded via axial, torsion and chain differential tests per the recommendations in the BS EN 115 standard.

Figure 2 shows data of the traces for the nine strain gauges, which were downloaded from the smart step after running the escalator for more than 15 min. Unfortunately, strain gauge 2 developed a malfunction; therefore, the data from this gauge is ignored. Due to passenger loading, in most (if not all) of the traces, some peaks developed on the main side of the escalator. These peak stresses were generated from passengers walking or standing on the step.
Passenger density was low during the trial. An escalator with low passenger density was chosen because we did not want clatter creating signals that could become difficult to interpret. Even with low density, the effect of passenger loading made the generated signals/traces from the step rougher in patterns and appearance, especially on the main side of the escalator.
Therefore, the values of Df are higher during passenger loading, compared to those of a free-loading escalator (Table 1).

It is not a surprise not to see a manifestation of a relationship between the Df and stress levels during passenger loading (Figure 4). This is due to the variability in passenger behavior (fast or slow, walking or standing), weights, distribution (location of applied load), etc. For a plot like this, it is only fair to depend on when the escalator is free of passenger loading. However, more studies will be conducted to verify many other variables, such as high passenger density. 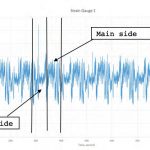 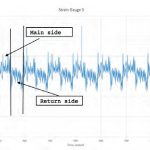 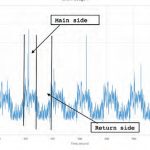 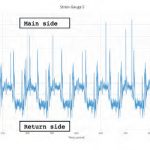 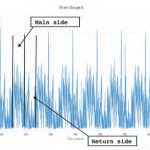 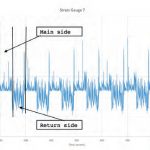 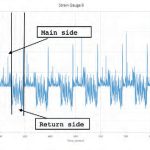 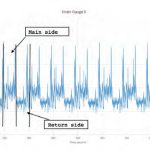 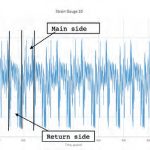 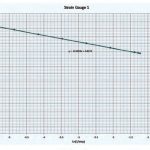 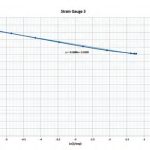 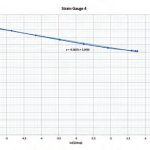 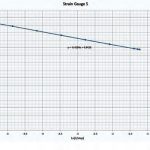 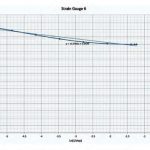 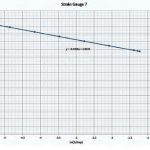 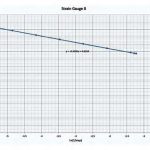 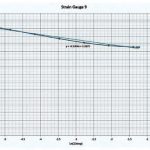 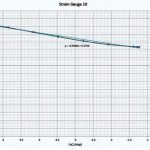 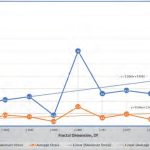 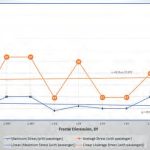 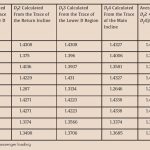 Now that we have proved the fractal nature and characteristics of signal data, we can use the principles and methodology of our studies to explore and understand the actual design behavior of machines and forecast the required maintenance regimes for them. Our attempt here is to use the data we have collected so far to explore whether each Df values of a particular trace consists of multiple partial Df values. First, we will determine whether these partial Df values are controlled by simple mathematical processes, such addition and averaging, to produce the overall value of a particular Df value of an overall trace. This in-depth look will help investigators focus on a particular region or location in a mechanical system of a machine like an escalator.
This study will try to discover whether there are multifractal dimension values in overall traces/signals collected from the smart step after it has been run in an escalator. One case will be without passenger loading, and one will be with passenger loading. Similar ideas have been tried for the study of nonlinear behaviors of machines like milling and skimming workshop machines.[6] Additionally, music signals at multiple time scales have been studied. Their result was proposing the multiscale Df concept. Their method and proposal appeared to be promising for music signal analysis.[6]

As far as we are aware, no other references clarify and adopt the concept of multiple partial Df values in a way similar to that adopted in this research. We believe that our approach here will focus the minds of designers and researchers to improve machines’ performance and reliability. Local regions in overall traces of data can be scrutinized in depth using the Df concept. It may then work as a diagnostic tool to help designers and
maintainers by qualifying their machines.

The scaling step technique has been used to determine Df. A computer program was written in Microsoft Excel to determine Df and plot the data. Our methodology is very similar to the Multiresolution Length Method, which has been used by many researchers.[4 & 7-10]
The techniques used to determine Df values and obtain the raw data/measurements from the smart step have been explained in depth.[2-3] Each trace for each strain gauge was divided into four regions: upper D region, return incline region, lower D region and main incline (Figure 5). (“D” is used to indicate the transition stages in the step band from the main to the return sides and from the return to the main side.) Figure 6 shows how the trace from strain gauge 7, for example, was divided into the four regions. Df was calculated for each region. The measurements, again, were obtained when the escalator was free of passenger loading and with passenger loading.

Tables 2 and 3 show the estimated Df for the measured data, which were obtained from previous studies during free passenger loading and passenger loading.[3] The tables show that each region in the escalator has its own Df value. The value for each region reflects the nature, simplicity or complexity of that region, considering other components and subassemblies in and around that region. The value can be used as an indicator or a reference to determine the health of the machine, particularly in the region under study.
The most interesting finding in Tables 2 and 3 is that the summing and averaging technique works well with the partial Df values in assessing the overall Df value. This technique has great benefits in determining the health of the escalator (or any machine). It will allow investigators like designers and maintainers to quantify the sub-behaviors of individual components and subassemblies in a machine and compare them to the overall Df value and the shape of the overall trace. 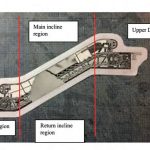 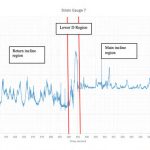 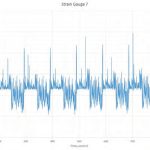 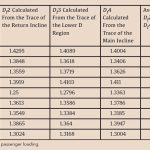 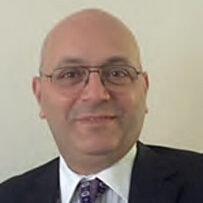 Chief engineer for Tube Lines Specialist Services. He has worked for the University of Manchester Institute of Science and Technology (UMIST), Brunel University, Oxford University and the industry. He was a materials scientist for Cookson Group, design engineer for ABB and senior design engineer for Olympus the Hydronix. He holds a PhD from UMIST and has published papers for various industries, including vertical transportation.

Mechanical Ramp of Gran Via Vigo

The Use of Lifts in Offices in Social-Distancing Environments