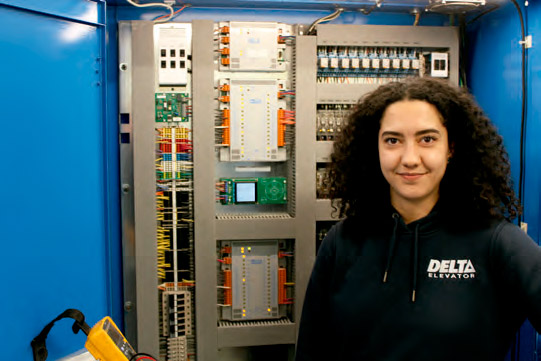 De Sousa says she is continuing to learn a lot about troubleshooting.

A little encouragement has gone a long way for Gabby De Sousa, a Toronto native who earned her two-year Electrical Engineering Technician degree from Durham College in Oshawa, Canada, in 2016. Earlier settling on a career as an electrician, De Sousa became discouraged after applying at more than 70 companies and receiving only a single response. Enter the women’s Elevating Devices Mechanic (EDM) program, which De Sousa learned about from her mentor and former teacher Pam Stoneham, associate dean of Durham’s School of Skilled Trades, Apprenticeship and Renewable Technology, who encouraged De Sousa to apply. Rebecca Milburn, Durham executive dean and principal of the Whitby Campus — which teaches the trades — explains the women’s EDM program was a one-off that came about when targeted funding to address a deficiency (in this case, women elevator mechanics) became available in 2017. The program yielded several success stories, and De Sousa’s is a shining star among them. The young mechanic has been with her current employer, Delta Elevator Co. Ltd. in Markham, for approximately two years and foresees a solid future in the industry. As she forges relationships and solves problems, her confidence continues to grow. Future goals include teaching part-time at Durham to encourage other women to pursue nontraditional careers in the trades.

KW: Where did you grow up, and what were your childhood career ambitions?

GDS: I was born and raised in Toronto. Ever since I was little, I always changed my mind about what I wanted to be. Actually, one of my earliest ambitions was to be a dentist, then a firefighter, then a zookeeper. Finally, in high school, I was inspired by my woodshop class and its teacher to achieve a career in the trades. That’s when I realized I wanted to be an electrician.

KW: When and how did elevators enter the picture?

GDS: After completing the Electrical Engineering Technician program at Durham College, I had an extremely tough time getting a job, or even securing an interview. By chance, I met with an old professor from Durham [Stoneham], who was associate dean at the time. She had always been a role model when I was in school, and when she mentioned that I might be perfect for a new program they were offering, I decided to jump right in and expand my toolbelt. This program (ELEVATOR WORLD, February 2017) offered a chance for 15 women to receive training in Elevating Devices. At first, I didn’t know how I felt about it. I truly doubted my ability to do the job, but I had a great team of cheerleaders who believed in me and motivated me to continue and try my best.

KW: If you were not an elevator mechanic, what would you be?

GDS: I’d probably still be in the trades, doing electrical work or carpentry. I love working with my hands and being able to fix things. It feels really rewarding.

KW: How did you connect with Delta Elevator, and when did you start working there?

GDS: I was moving back to the city after starting my career in Barrie, [Canada], with another company. After a couple of months of searching, Delta Elevator had an opening for a maintenance mechanic apprentice. After the interview, I was offered the position and started just a few days later [in October 2018]. I was immediately impressed by their commitment to training new employees and involvement in their happiness and wellbeing.

KW: How did Durham College help prepare you for your career?

GDS: Through the years, Durham College has been very helpful and committed to finding their students work. Like I mentioned, after graduating from Durham as an electrical engineering technician, I had a real difficult time finding work in my preferred field, although it almost seemed like the professors saw more in me then I did in myself. They pushed me to achieve more than I ever expected. Without that push, I don’t know what I would’ve done.

KW: What does your role as a mechanic entail?

GDS: As a maintenance mechanic, I am responsible for my own route of elevators. Every month I go to each building and take my time performing preventive maintenance. Throughout the day, I may receive trouble calls, or, even worse, reports of entrapments that I must respond to quickly. Since each day is very different from the next, it never gets boring. I take customer service seriously. The customers pay for my services and expect nothing but the best, so I strive to give them just that, with a smile.

KW: Tell me about a job at Delta that you found challenging/rewarding.

GDS: A couple of years ago, the modernization crew completed a GAL modernization on one of three elevators. However, one of the elevators would intermittently shut down between the 16th and 17th floors, trapping people. For several weeks, multiple mechanics would take trips to this building and take a shot troubleshooting. One evening when I was on call, I got a call to this location about an entrapment. After getting the passengers out, I proceeded to check the fault log to see what happened. There was a fault that made me look at the new tapeless encoder. I climbed on top of the elevator and proceeded to troubleshoot. Once I got in between the 16th and 17th floors, I noticed that the light on the encoder flashed for a second. I thought that was weird, since it’s usually solid. I tested it a couple of times, and finally noticed a small break in the actual tape. I immediately called my supervisor, informing him of my find and getting permission to shut the elevator down for the night so others didn’t get stuck. Finding this made me realize, when troubleshooting, to take your time and pay attention to detail. You never know what you may miss.

KW: What advice/guidance would you offer to young women considering a career in the elevator trade?

GDS: Young women should not be afraid to do what men do. Instead, we should be determined to show that we are just as capable. One day I was cleaning the pit of an elevator and I noticed something: It was a bookmark that said, ‘The best man for the job is often a woman.’ Needless to say, that bookmark hangs in my work van, keeping me motivated every day.

KW: What do you like to do in your spare time?

GDS: I try to make the most of it. I spend a lot of time outdoors, going camping and fishing. If I can’t get away from the city, I tend to bake cakes and pastries, or sketch in my sketchbook. I have a very creative mind and have always been fond of art and photography.

KW: Where do you see yourself in 10 years?

GDS: With a stable career in the elevator field, working part-time as an instructor at Durham College. I’m working toward my Teaching Adults certificate, which will allow me to teach and instruct young men and women who want to proceed with a career in the elevator trade. Personally, I want to start a family and enjoy what time I have off at my secluded vacation cottage in northern Ontario.