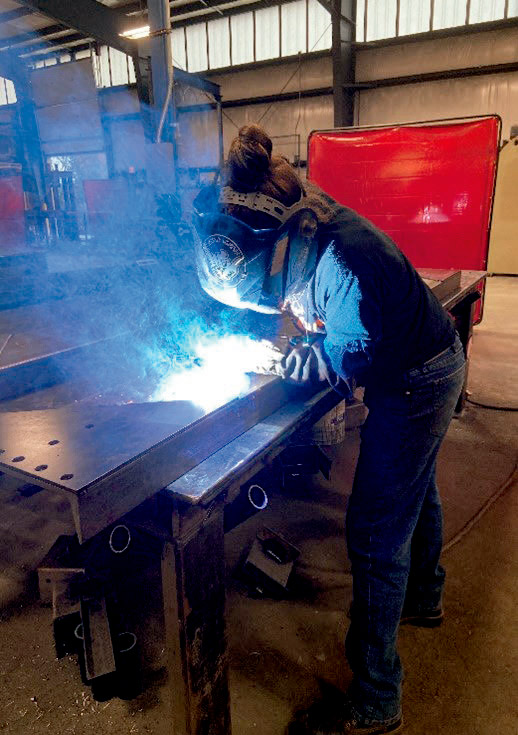 On the Delmarva Peninsula in an area often referred to as the Eastern Shore, the small town of Salisbury, Maryland, pulls quite a bit of weight in the elevator industry, and that’s primarily due to it being the home of Delaware Elevator Manufacturing (DEM). DEM has been a fully operational elevator manufacturing facility since the early 2000s. Walking around the shop, you see an abundance of energy, hard work and grit.

In a sea of sparks, heavy machinery and focused craftsmen, you cannot miss her. Her name is Dana Calder. Calder joined the team at DEM a little over a year ago, just one month after graduating as salutatorian from Arcon Welding Services Training Center in Salisbury. To say she has been an incredible asset to the team — as a welder, fabricator and teammate — fails to do her justice. Calder puts her whole heart into her career, and that is apparent from her structured workstation, readiness to take on new challenges and huge smile. After sitting down with Calder and talking to her over the course of an hour, I think we can all learn a few things from her.

After leaving her job in the food-service industry and moving to the Maryland coast from the mountains of Pennsylvania, Calder took a chance on welding. She was intimidated at first, since she was entering a work environment that has long been male-dominated. But, once she started, she quickly realized she was exactly where she needed to be.

She beamed as she described how accepting and helpful her coworkers have been over the past year — despite that she did not always want to ask for help. “It’s a challenge of mine,” she says. “I was worried I was not going to know anything, and asking for assistance is not easy.” However, she found her male coworkers helpful and easygoing.

Calder started as a welder and quickly advanced to fabricator. She explained how she loves that her job allows her to learn something new each day. She genuinely enjoys welding and is a team player. If she is not at her workstation, her coworkers say she still stays busy — whether it be sweeping, helping with various shop tasks or assisting a coworker.

To say she has been an incredible asset to the team — as a welder, fabricator and teammate — fails to do her justice.

She credits her success at DEM to those she refers to as “amazing mentors,” Dave King and Mike Smith. King and Smith refuse to take credit. King said he has been in the welding field for more than 20 years and has never once met a more precise and disciplined welder than Calder. The managers at DEM also raved about her attitude, work ethic, abilities and consistency. King insisted on showing your author Calder’s practice work, known in the welding field as “stacking beads.” He promised I would never see anything like it. He was right!

This industry is tough. It requires thick skin, detail, drive, grit and focus. Calder portrays all these qualities daily and is a real asset to the team as she breaks barriers as a woman in welding. She looks forward to growing in her career and will continue to give everyone in the shop a run for their money.