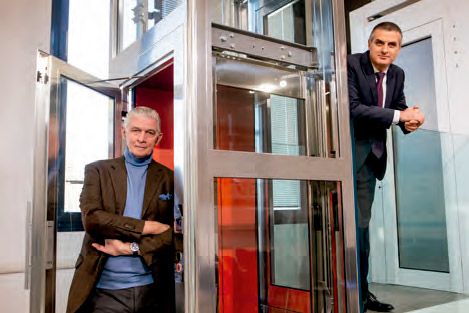 Gävle, Sweden-based Cibes Lift Group has acquired Titan Elevators of Sidcup, U.K., Global Legal Chronicle reported in December 2020. The move is to strengthen Cibes’ presence in the London area and mark an expansion of its U.K. business by adding modernization services and high-speed lifts to its offerings. Titan Elevators services include lift installation, repair, modernization and maintenance, but the company also offers bespoke and standardized lifts for various applications. Since its founding in 1997, Titan Elevators has experienced a growing customer base in the London and Home County areas. A specialty is the company’s custom solutions in the luxury segment of the high-speed lift market. Cibes Lift Group is one of the world’s largest manufacturers of space-efficient lifts for both home and business use.

Italy’s IGV Group has named architect Giulio Cappellini art director, the company announced in December. IGV CEO Michele Suria observed the company — which exports 85% of its products to more than 70 countries — distinguishes itself “by assigning the elevator not only a technical and functional role, but also an aesthetic one.” Named one of the world’s top design trendsetters by Time, Cappellini will reinforce this approach, according to IGV. “Innovating in this sector not only means creating a beautiful coating, but [also] transforming the use of the product — even if short — into a sensory experience,” said Cappellini, who will lead discussions with architects on complex projects throughout the world.

Schindler has entered into a partnership with AI company SenseTime to develop the Escalator Passenger Behavior Safety System, multiple news outlets, including China Daily, reported in December 2020. In announcing the partnership, Schindler said multiple AI technologies, from object detection and behavioral recognition to density analysis, will allow escalators to recognize when passengers engage in dangerous activities, such as attempting to board an escalator with bulky luggage, wheelchairs or strollers. When it detects risky behavior, it will use voice prompts to warn passengers not to board the escalator and use an elevator instead. It will also raise alarms regarding overcrowding to prevent stampedes.

The system will employ cameras mounted above escalators to provide real-time video streams, which are analyzed by the AI algorithm installed on an onsite server. An equipment operator will receive an alert and can stop the escalator and send assistance if needed. In addition, the system will support operational efficiency by controlling activation and deactivation of building vertical-transportation equipment. Schindler said the system is being rolled out in China, but the company has received inquiries from other countries and expects the service to realize global demand.

KONE has launched a program focused on developing innovative, sustainable “people flow and new technologies for smoother and safer urban living,” the OEM announced in November 2020. Aiming to contribute to the Finnish government’s goal of achieving carbon neutrality by 2035, it is part of Veturi, an initiative funded by government organization Business Finland focused on R&D to create more sustainable, resilient and inclusive cities. Rauno Hatakka, KONE head of Technology Management, says solutions, services and business models developed in the program promise to increase both employment and export opportunities in Finland. “We plan to take a comprehensive approach with program execution, from multidisciplinary R&D activities to building an extensive global ecosystem of partners and customers,” Hatakka said.

Thessaloniki, Greece-based Biofial Hydraulics recently entered two new markets and invested in new technology, and the company reports it is fully operational as it takes all necessary precautions related to the pandemic. Its hydraulic products are now in Latvia and the Dominican Republic. Describing Latvia as “one of the last pieces to add in our European export puzzle,” Biofial has forged partnerships with two customers in the country, which brings its export relationships to 56 countries worldwide.

In the Dominican Republic, Biofial Hydraulics products have been installed in several lift systems. In the past year, the company also invested in two new pieces of production equipment: from Oxnard, California-based Haas, a four-axis cutting and processing center lathe with automatic bar feeder; from Schaumburg, Illinois-based Bodor, a fully automated fiber cutting laser machine. Biofial says the investments have resulted in enhanced production capacity and shorter delivery times.

In partnership with Guangzhou Publishing House, Hitachi Elevator (China) Co., Ltd. launched Little Elevator Master Training Manual, a book aimed at teaching children elevator principles and safety, during an event in Guangzhou, China, in December 2020. The book is part of Hitachi Elevator’s continuing efforts to promote safe elevator use among children. In 2018, the OEM published Amazing Journey of Elevator, based on the China Ministry of Education’s Guidelines for Public Safety and Education in Primary and Secondary Schools. In May 2018, Hitachi Elevator began the “Shared Reading on Safe Elevator Riding” program and has since worked with public-education entities in locations like Guangzhou, Shanghai and Tianjin to promote the program. With the latest book, Hitachi Elevator aims to help children understand elevators’ history and  future possibilities.

Otis Singapore integrated its eCallTM mobile app with the existing smart building app at the 66-story, 22-year-old Republic Plaza office building in downtown Singapore, Otis announced in December 2020. Done in collaboration with property owner City Developments Ltd. and implementing an application programming interface — allowing the apps to “talk” to one another — for the first time for Otis, the technology was part of the modernization of an elevator system that includes 15 double-deck lifts. Work also included installation of the CompassPlus® destination-dispatch system. After downloading the tower’s CityNexus app, tenants use eCall to summon an elevator as they approach it, helping them avoid touching any public surfaces. “This upgrade demonstrates how we’re listening to our customers and working with them to find the best solutions for their buildings, while also helping to promote safety as Republic Plaza tenants return to the workplace,” Otis Southeast Asia Managing Director Grant Mooney said.

The Levytator: A New Innovation That Could Change Escalators as We Know Them