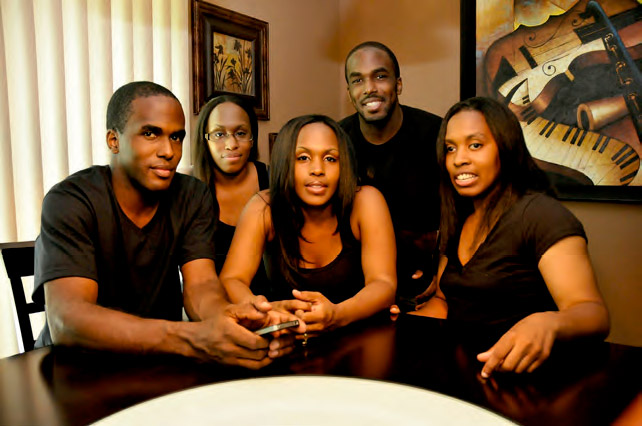 Mid-America Elevator’s Sidney Gaither reflects on 50 years in the industry, and his remarkable wife and children.

From marrying his best friend’s cousin (who happened to be the girl next door) to becoming the father of the first naturally conceived (without the aid of fertility treatments) and only surviving black quintuplets[1], to accepting Jesus as his savior, Sidney Gaither, sales representative at Mid-America Elevator Co., Inc. in Indianapolis, says divine intervention has played a big role in his life. Through it all, he has quietly built a solid career in the elevator industry, an industry in which he marks 50 years in 2020. One of the quintuplets, Rhealynn, followed her dad into the industry. She was hired by Mid-America owner and founder Ron Selke and has been assistant to the company president, Brian Selke, since 2015.

The third of four children, Gaither was born and raised in Louisville, Kentucky. Because college was not affordable, after high school he enrolled in and graduated from United Electronics Institute (UEI) in 1970. The trade school helps place graduates in good-paying jobs in industries such as aviation. Gaither had an offer from Norton Aviation in New Jersey that, he said, would have been great pay in Louisville, but not so great on the East Coast. So, he decided to stay at his part-time job at a supermarket until something with decent pay in the Louisville area came along.

In the fall of 1970, Gaither added a new, professional dimension to his friendship with Selke. Gaither and Ron Selke had become friends when both were attending UEI, and Ron Selke went on to get a job in October at K.M. White elevator company in Louisville, which was later bought by Armor Elevator. Gaither learned about and got a job at K.M. White, and he started his elevator industry journey in November. There, Gaither worked in the testing, drafting and engineering departments, as well as in the field when union laborers went on strike in 1972. While at the company, Gaither studied electrical engineering at the University of Louisville at night.

Eventually, both young men — then in their mid-20s — sought opportunities elsewhere. Ron Selke had moved to Indianapolis, where he was working for AMCO Elevator (later acquired by thyssenkrupp). He told his friend about a job opening there, and Gaither was hired in summer 1976. Gaither says his first construction job at AMCO was with a man who went on to serve as state elevator inspector for Indiana. After that job, Gaither switched to route mechanic — a position he would hold for many years — until 1995, when he transferred to sales.

“The Girl Next Door”

Gaither said his move to Indianapolis marked his first time away from home. When he found a house to buy there, he told his best friend, who said the house he wanted to buy was next door to that of his cousins. Gaither said:

“His mother drove up with my parents when I came to move in, and I was introduced to his cousin’s family and Suzanne — the girl next door. Her uncle was pastor at a church that is less than a block from where Mid-America stands today. I started attending church with her and, in December 1976, had the pleasure of being baptized in Jesus’ name and being filled with the Holy Ghost. I had a stable influence from the time I moved to Indianapolis.”

On September 1, 1979, Gaither married Suzanne. Selke was best man. It was during his time with AMCO, in August 1983, the quintuplets were born, and the Gaithers (including 2-year-old son, Ryan) suddenly went from a family of three to a family of eight. During Suzanne’s pregnancy, Gaither said, her obstetrician “saw four babies at 13 weeks, then five, then six,” and, finally, back down to five. She was in the hospital for 80 days prior to giving birth to the quints — Ashlee, Joshua, Renee, Rhealynn and Brandon — on August 3, 1983. More than 50 doctors and nurses were on hand in the operating room when Suzanne gave birth, and subsequent visits with a pediatrician were similarly crowded with the family and caregivers.[2]

The Challenges of Multiples

Gaither chuckles when asked about what it’s like raising five babies at once, plus a toddler. He says:

“If you haven’t experienced it, I don’t know how I could explain it to you. Most newborns, when they come home, go through 10 bottles and 10 diapers a day. You multiply that times five, and that’s 50 of each, every day. You can imagine the expense and stress of raising six small kids. We were blessed to make it through all of that. The blessing now is that they are 37, and the grandkids can come over, and I don’t have to change their diapers or fix their bottles, though, with COVID-19, we can’t get as close as we could in years past.”

Five-and-a-half months after the babies were born, Suzanne Gaither went back to work as a student-loan manager, and the Indiana Black Expo nonprofit organization, along with a few local restaurants, greatly assisted the family over the first few years of the quintuplets’ lives. Sidney continued to go to work every weekday at AMCO.

Despite fanfare when they were born — declarations from the mayor, appearances on TV shows like The Today Show and Donahue, even a McDonald’s commercial — the five had an otherwise normal childhood rooted in faith and family. Even when they were older, they eschewed opportunities to appear on reality TV shows and feel they are better for it.[2]

Relationships and a Passion for Customer Service

Through the years, Sidney Gaither’s friendship with Ron Selke remained strong, with Gaither becoming godfather to one of Selke’s children while working at Armor. Ron Selke had launched Mid-America in 1979, and, in the mid 2000s, Gaither called to ask about a job opening there. He joined Ron Selke’s company in the sales department in July 2005.

At Mid-America, Gaither has handled new installation, construction and repair/maintenance sales for both commercial and residential projects. He also works in the field when needed. He loves working for an independent elevator company. He says:

“The reward is that you get to talk regularly to people. We’re not owned by a conglomerate. The president of the company (Brian Selke) has his office right outside my office, and if a customer needs to talk to him, they can. They don’t have to dial an international number and go up the chain. What I like about Mid-America is, it is a family-based business, a small group — fewer than 50 employees. We get along, we have a good time, and we get our work done.

“A philosophy I’ve had since I’ve been in the trade is that, if you can’t tell somebody the truth, then you don’t need to be in business. You provide what a customer needs, not what you want to sell. Mid-America believes that, and we don’t burn bridges. We’ve had customers who have come, and a very few of those have gone. The fact is, if you tell them the truth, the bridge isn’t burned. If they find out the grass is not greener on the other side, you always have the chance to come back and assist that customer in some way.”

How This Story Came About

When researching an In Memoriam about the late David Spaethe (ELEVATOR WORLD, September 2020), your author came across a letter Spaethe wrote to EW in late 1983 titled, “And Baby Makes Eight!!!!!” Spaethe (at the time vice president at AMCO Elevator) was writing to congratulate colleague Sidney Gaither and his wife, Suzanne, on the birth of their quintuplets. Spaethe talked about all the support from colleagues, and city and local authorities, observing “Not only is this the first set of quintuplets born in Indiana, we believe this is the first set born to an elevator mechanic.” Your author reached out to Sidney Gaither, and he was happy to tell me about his life, family and time in the industry.

Chicago in the Spotlight