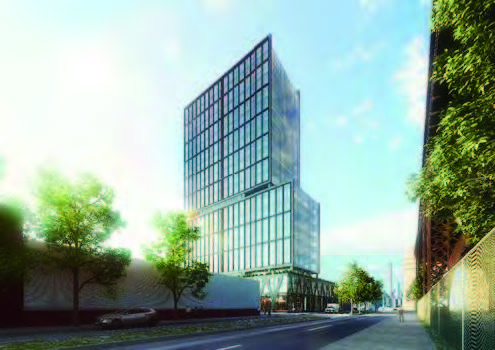 Titan Machine Corp.’s plan for a 21-story mixed-used building has been approved for commercial zoning at Titan’s current location at 42-11 Ninth Street in Long Island City (LIC), REW reported.
The elevator manufacturing and repair company, founded in LIC in 1973, has teamed with RXR Realty, a firm that owns and manages 25.5 million ft2 in and around NYC. The project team is seeking additional partnerships with Queens-based organizations to connect LIC residents to the 1,500 permanent jobs the building is to eventually accommodate within its 70,000 ft2 of industrial space, 270,000 ft2 of commercial office space and 2,900 ft2 of ground-level retail. The portion of jobs that are industrial is expected to number 300-350.
“The project represents a model for private development that allows additional commercial floor area to cross-subsidize the building’s industrial space, removing the need for public subsidies,” the source noted. Jeffrey Nelson, senior vice president, RXR, added, “We look forward to continuing our work with Urban Upbound and LaGuardia Community College, and to forging new relationships with other local organizations to ensure this project benefits the LIC community.”

Champion Elevator has acquired Westech Elevator Services Inc. of White Plains, New York, Champion CEO Donald Gelestino announced in October. The move is part of an expansion strategy for which multiple millions of dollars have been set aside, Gelestino said. With more than 40 employees and 775 units under contract, Westech was established in 2004 by Lucas Kairdolf and Yamil Quinones. The company specializes in mid-market elevators and provides elevator service, repair,
modernization and inspection in the New York area. Gelestino said Champion is working to identify
additional partnership opportunities to join forces with “like-minded entrepreneurs….”

Three companies that recently drew investment interest from private-equity firm Arcline Investment Management are joining forces under the banner of American Elevator Group (AEG), a move that brings together four past presidents of the National Association of Elevator Contractors (NAEC), according to a report in the October issue of NAEC’s Mainline newsletter. The three companies are Jersey Elevator of Aberdeen, New Jersey; D&D Elevator Maintenance of Elmsford, New York; and Kencor Elevator Systems of West Chester, Pennsylvania. In August, Arcline acquired Jersey Elevator and made investments in D&D and Kencor (ELEVATOR WORLD, October 2020). The formation of AEG is being spearheaded by former NAEC President C. Mark Boelhouwer, who serves as CEO.
Jersey Elevator, founded in 1974, and D&D and Kencor, both founded in 1981, provide maintenance, repair, modernization and new installation of elevators. The companies are led by John Sweeney, Bobby Schaeffer and Karen Kennedy, respectively. Sweeney, Schaeffer and Kennedy’s father, Richard Kennedy, are past presidents of NAEC. Boelhouwer said the three companies provide a “strong foundation,” adding that American Elevator Group “will continue to grow as we welcome other quality contractors to our collective. . . .”
Also in October, Boelhouwer announced that Gary Kozlowski has been appointed AEG’s vice president of finance, responsible for overseeing financial management of the group’s service operations. Kozlowski has 38 years’ experience in the vertical-transportation industry, including work with Otis, Schindler and thyssenkrupp. Among his duties will be assistance with development and growth of the group as future acquisitions are announced.

Otis has launched a new global corporate social responsibility (CSR) program focused on advancing youth science, technology, engineering and mathematics (STEM) education and inclusive mobility solutions, the company announced in September. Made to Move Communities™ is an annual global student challenge designed to inspire creative, STEM-based solutions for mobility issues. Students in the program’s first year will focus their research on mobility solutions for communities affected by the COVID-19 pandemic. According to the United Nations’ 2020 Sustainable Development Goals report, more than 90% of COVID-19 cases are in urban areas. During the challenge, students will explore solutions that enhance connectivity and productivity, education, employment, medical care and social services. These solutions could, for example, address challenges with public transportation or mobility access for those with disabilities.
Made to Move Communities’ goals align with Otis’ “Our Commitment to Change” announced in August, expanding upon the company’s commitment to STEM and vocational education and joining with community and business partners to build a diverse talent pipeline. These efforts involve hundreds of dedicated employee mentorship hours and STEM program grants. The 2020-2021 program will be conducted virtually for students’ safety.
The program, which launched in October, was set to take place in phases across each of Otis’ four geographic regions through March 2021. Schools from Brazil, China, Germany, Hong Kong, Japan, Russia, Singapore, Spain and the U.S. are participating in the inaugural program, and Otis plans to increase the number of locations, students and employees involved each year.