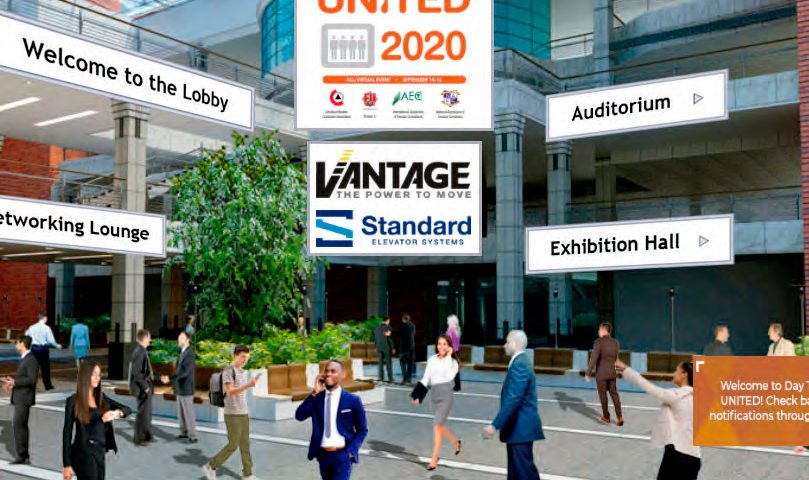 Alerts about the imminent arrival of Hurricane Sally frantically beeped on ELEVATOR WORLD staffers’ phones as they listened to and watched the United 2020 Virtual Convention & Exposition on September 14-16. Originally scheduled to take place in Houston, the joint convention and expo of the National Association of Elevator Contractors (NAEC), Canadian Elevator Contractors Association (CECA), International Association of Elevator Consultants (IAEC) and Elevator U — typically held every four years — was held virtually due to the pandemic.

Nearly 900 participants representing the vertical-transportation industry all over the globe took part in the event. There were 70 exhibitors with more than 80 booths, 11 educational sessions and discussions, and three on-demand educational sessions. United kicked off on Monday with the partners’ individual business sessions. (See sidebar.) Exhibitor networking lounges began on the second day. Attendees were able to watch live presentations, network and have one-on-one consultations with experts.

After official welcomes from CECA President Doug Guderian, Elevator U President Eddie Morris, IAEC President John Koshak and NAEC President Donald Gelestino, keynote speaker Robert Stevenson gave an energizing illustration on the importance of embracing change, titled, “If You Don’t Like Change, You Are Going to Hate Extinction.” Following his presentation, exhibit halls opened, and attendees browsed through the virtual tradeshow floor and visited booths. They engaged in one-on-one chats with personnel and were able to download exhibitor promotional materials, watch videos and leave their virtual business cards. Just as at a live event, the educational sessions also commenced. Many of the sessions offered continuing-education credits. (See sidebar.)

The awards presentation opened the final day of United 2020, with each association president announcing recipients. Recognition was also given at the respective partner business sessions. CECA honored Sean Cowen of thyssenkrupp Elevator with the President’s Award and Allan Hopkirk of Trident Elevator as its newest honorary member. The association also expressed appreciation to longtime members.

Elevator U shared a photo appreciation of members and events of the past year. IAEC honored John Rearick of Rearick & Co. and Gregory Sacks of Superior Elevator Inspections & Consulting with Qualified Elevator Consultant awards. NAEC presented Zap Supply with the Contractors’ Choice Award, and Gelestino presented both the William C. Sturgeon DistinguishedService and President’s awards to Louis J. Blaiotta, Jr. of Columbia Elevator Products Co. Inc. It was the first time in NAEC history for one person to receive both awards in the same year. In presenting the President’s Award to Blaiotta, Gelestino said:

“There are a lot of contractors who end up in the elevator industry through a family legacy. Some of them don’t really make anything out of it, and others, like this man, make the best of it. What I see in my award recipient is someone who took the reins of the company from his father and grew it and created a culture where his staff loves him — and it’s a big staff. The friends I’ve seen him surround himself with are examples of some of the finest people I’ve ever met.”

Following the awards presentation, the exhibit halls opened the final day of the virtual tradeshow. The first-ever virtual version came to a close with a few words from United Chairman Eddie Morris:

“I hope that you all enjoyed this unique United as much as I did. It has been an honor to serve as your chair for this year’s event. Like we said at the beginning, we wish we all could have been together in person, but the world had other plans for us. Virtual sure isn’t the same, but it was still wonderful to be able to see and chat with everyone. Thank you so much for participating in this year’s United. We hope to see you all in person very soon — definitely at the next United in Atlantic City in 2024!”

United partners reported the following during their respective meetings.

Officers and Boards of Directors

“Like we said at the beginning, we wish we all could have been together in person, but the world had other plans for us. Virtual sure isn’t the same, but it was still wonderful to be able to see and chat with everyone.” –United Chairman Eddie Morris

Educational sessions took place on September 15-16. The first was “Maintenance Control Program: Managed Maintenance” by John W. Koshak of eMCP LLC. Though it was prerecorded, Koshak was on hand to answer questions. The presentation explained the background and details of maintenance control programs (MCPs). He added that they must be modified for different types of buildings. Then, he introduced his company’s eMCP product and its features. Concurrently, Sandra Boudloche and James Touey of the U.S. Department of Labor presented on “The OSHA Inspection — Are You Prepared,” in which they covered training, safety standdowns and important procedures and recordkeeping. The OSHA Alliance program was also a focus.

Another two concurrent sessions on September 15 were “Elevator Selection for Low-Rise Buildings” by Travis Hall of Alliance Elevator Solutions and “Taking Advantage of Control System Technology” by Rick Cahoon of Vantage. The former compared gearless machine-room-less and hydraulic elevators, and nonproprietary and proprietary systems. The latter covered several modern technologies for positioning systems and how to set up the GAL GALaxy IV and Elevator Controls Pixel controls.

On September 16, escalator expert Ken Smith of Ken Smith & Associates LLC compared and contrasted ASME A17 and American Public Transportation Association requirements for escalators. He reviewed the minimum design requirements for all units and the special requirements of escalators used in transit applications. Concurrently, “Three Things You Need to Know About the 2019 ASME Code Updates” detailed one-way video and two-way text communication requirements, including under which circumstances the new code applies. Calvin Linde of MAD Elevator Inc., and Dave Mann and Don Holloway of Kings III Emergency Communications collaborated on the presentation.

The final sessions, also held concurrently, were “Electronic Valves and Applications for Use in Hydraulic Elevators,” which covered when and when not to use electronic valves. Jason Anderson, Mike Moss, Patrick Latimer and Scott McLellan, all from Schumacher Elevator, gave their expert advice. In “Safety Absolutes — Industry Best Practices to Prevent Worker Injuries,” National Elevator Industry, Inc. Vice President, Codes and Safety Kevin Brinkman explained the association’s nine “Safety Absolutes” with the goal to teach participants how to use them to help identify ways to maximize safety and prevent injuries.

Other educational sessions were also available on-demand for an extended duration. These were:

Business News from around the World

The Hocquart Escalator in the Gare d’ Orsay

Usage of Voice Recognition inside an Elevator