Home » Articles » The pandemic, transit and tall towers throughout Manhattan 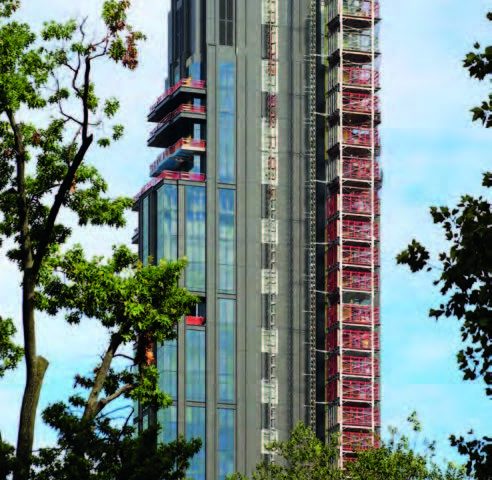 Pandemic-related woes have brought down high prospects for the NYC construction market, The Real Deal reported in October. Citing the New York Building Congress and New York Building Foundation, it said, “The pandemic has shaved US$16 billion off projected construction spending in 2020 and 2021” and that the congress estimates spending will reach only US$55.5 billion this year, down from a forecasted US$65.9 billion. Next year’s revised spending expectation is to be only a little more (US$56.9 billion) with even less for 2022 (US$56.1 billion).

The months-long shutdown of construction deemed nonessential and a broader economic downturn gripping the region are cited as sources of the lower spending forecasts.

“Conversely, government spending on projects was forecast to increase this year and the next, despite massive pandemic-related budget deficits at every level of government and the big public authorities,” the source added. According to the congress, such spending will reach US$21.1 billion in 2020, up from US$19.7 billion in 2019. It is to continue to rise next year.

As for related sectors, the Metropolitan Transportation Authority reportedly has no choice but to cannibalize its capital program if the federal government does not grant its request for a US$12-billion bailout, and the Port Authority of New York and New Jersey has asked for US$3 billion from Washington. Average construction employment for 2020-2022 is projected to drop 14% from the levels of 2017-2019. Still, the projected 128,200 new construction jobs in 2020 are to increase to 136,650 in 2021 and 140,200 in 2022.

The Metropolitan Transit Authority’s (MTA) long-delayed plans to make the 68th Street Hunter College station accessible to subway riders with disabilities will have to be approved by the Federal Transit Administration, THE CITY reported in October. MTA has recommended shifting the location of a lift that would lead in and out of the station to avoid installing one inside a building in the City University of New York, what the source calls a “more difficult task.” The street-level elevator is now set for the northeast (instead of the southeast) corner of East 68th Street and Lexington Avenue. However, the change could further delay a project that has been proposed for more than a decade.

The plans call for two more lifts that would connect the station’s mezzanine level to its subway platforms. The most recent projection of the project’s cost is US$120 million. The station is among 100 designated “key stations” that are to meet all Americans With Disabilities Act requirements by the end of 2020.

Exterior work on Rose Hill, an Art Deco-inspired residential tower in NoMad (ELEVATOR WORLD, May 2019), is nearly complete, New York YIMBY reported in October. The 45-story, 639-ft-tall skyscraper at 30 East 29th Street, designed by CetraRuddy Architecture and developed by Rockefeller Group, will bring 123 condominiums to the neighborhood. Architectural features include a chevron pattern on dark brown panels that run the height of the building, accented by gold-colored diagonal lines atop mesh grilles. The tower is topped by a tiered crown. Units range from one to four bedrooms, with prices starting at US$1.385 million. Completion is set for January 2021.

With its exterior finished, a 38-story hotel at 215 Pearl Street in Manhattan’s Financial District was nearly ready to open, New York YIMBY reported in October. Designed by Nobutaka Ashihara Architects and developed by The Lam Group, the structure houses a total of 320 rooms under the Courtyard by Marriott and Residence Inn by Marriott brands. Blending with its surroundings, the design features dark exterior walls atop a glass podium and a subtly cantilevering extrusion on the upper northeastern corner. South Korea’s HM Elevator installed the elevator system, which consists of two 39-stop, 2000-lb-capacity, 700-ft/min overhead traction units; two 26-stop, 500-ft/min, 2500-lb-capacity machine-room-less (MRL) units; one four-stop, 2500-lb-capacity, 350-ft/min MRL unit; and one three-stop, 2000-lb-capacity, 200-ft/min MRL unit.

Façade installation was proceeding rapidly at 140 West 24th Street in NYC’s Chelsea neighborhood, New York YIMBY reported in October. The 45-story, 416-ft-tall hotel tower, designed by Gene Kaufman Architect and developed by Sam Chang, will hold 143,949 ft2. Construction on the topped-out, reinforced concrete building between Sixth and Seventh avenues is being led by Omnibuild. Façade work is mainly occurring on the blank eastern and western walls, where workers were about halfway up, covering the sides with light-colored paneling. The main northern elevation revealed framework for the final exterior assembly of metal panels surrounding the tightly spaced windows that cover nearly the entire height of the structure. Above are setbacks that give way to an extended mechanical section, topped by two wooden water towers. The slender tower’s location among mostly mid-rise structures makes it stand out prominently and will provide guests with panoramic views of the skyline.

The hotel will have 508 guest rooms, a ground-floor main lobby, a dining area and kitchens within the cellar and first floors. The location is near 23rd Street subway stations at Sixth and Seventh avenues. No completion date has been announced, but the tower appears likely to wrap up construction in 2021.

High-Rise Marriott Hotel Near Topping Out in Chelsea

Construction on a Marriott hotel in Chelsea is nearing topping out, New York YIMBY reported in October. The 39-story tower at 113 West 24th Street, designed by Stonehill & Taylor Architects and developed by Lam Generation, will stand 420 ft tall with 360 rooms. The site is located between Sixth and Seventh avenues. The building’s reinforced concrete superstructure is only a few floors below the parapet, and much of the glass curtain wall has been installed. Long vertical strips of dark metal panels separate the windows on the northern and southern elevations, while the eastern and western walls are likely to be left as blank concrete.

With a total 136,700 ft2, the tower will have 10 guest rooms per level from the fourth to the 41st floor and feature a rooftop bar. Nearby transit stations are on West 23rd Street at Sixth and Seventh avenues. Madison Square Park is a short walk away. A finalized rendering has not been released, and a completion date has not been announced.

thyssenkrupp Elevator has joined the Corporate Electric Vehicle Alliance (CEVA) as a step in its plan to reduce its North American carbon footprint and greenhouse gas emissions, the company announced in September. CEVA, a group of companies dedicated to accelerating corporate transition to electric vehicles, is led by Ceres, a sustainability nonprofit. The alliance will support thyssenkrupp’s shift to an all-electric fleet by sharing best practices and success stories, and by helping the company identify and implement solutions to overcome market, technology and policy challenges. Earlier this year, thyssenkrupp Elevator announced long-term carbon goals. The company aims for a 25% cut in its carbon footprint by 2030, and a 50% reduction in greenhouse gas Scope 1 and 2 emissions by 2040. About two-thirds of the carbon reductions will be realized through fleet optimization, route efficiency planning and increased use of alternative-fuel vehicles.

CEC Elevator Cab Corp. of Bronx, New York, was one of four winners of the NYC Department of Buildings (DoB) inaugural Innovation Challenge, launched in early July in partnership with Urban Tech Hub @ Co. business incubator to solicit ideas on improving worker safety, building design, construction and regulation. The competition had two categories — “Carbon Neutrality” and “Hack the Building Code” — that garnered 80 submissions. CEC’s Sterilyft elevator air purification system was honored in the latter category. A team led by the DoB and its newly created Code Innovation Committee selected the winners, which were announced during the build safe|live safe digital conference on September 21-25.

Vietnam and the Philippines see investments in tall buildings

Stairwells Are Not for Wheelchairs