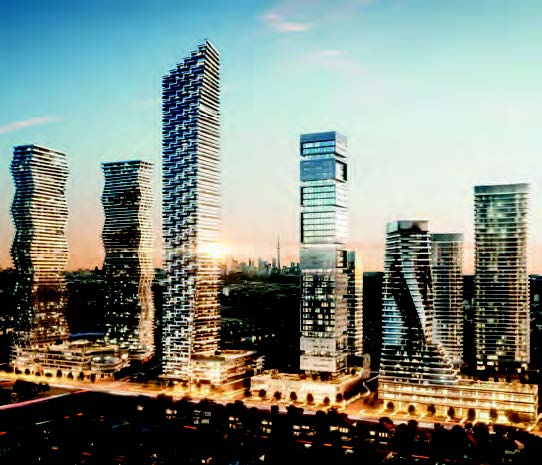 At 81 stories, M3 will be the tallest tower in Mississauga; rendering courtesy of Cooper Robertson.

thyssenkrupp Elevator Canada has upgraded its service platform by transforming its Scarborough, Ontario, Engineering Centre into an International Technical Services (ITS) Centre, the company announced in October. A U.S.-based ITS, which thyssenkrupp Elevator North America President and CEO Kevin Lavallee calls “a cornerstone of our new North American headquarters in Atlanta,” has provided third-party maintenance support in the U.S. since it was founded 20 years ago. The Scarborough facility, at 270 Finchdene Square, will offer similar services in Canada.
Previously, the Engineering Centre, which underwent a multimillion-dollar expansion in 2019 (ELEVATOR WORLD, July 2019), offered new installation and modernization engineering, Canadian board repair, elevator simulators, a showroom and a warehouse. That expansion also brought construction and modernization teams, as well as a branch office, under one roof. As the ITS, it adds field engineering support; specialized support services; additional training and documentation; diagnostic and specialty tools; board and drive repair; and new product support and collaboration, including for non-thyssenkrupp-branded elevators and escalators.

Mississauga Mayor Bonnie Crombie and representatives of Rogers Real Estate Development and Urban Capital Property Group held a groundbreaking in September at Burnhamthorpe and Confederation Parkway for M3, which will be the tallest building in the city at 81 stories and 180 m (EW, December 2018), insauga reported. The tower features subtle twists, a sloped crown and “sawtooth balconies that create a black-and-white diagonal pattern up the building.” Containing nearly 900 units, M3 is the third and tallest condominium tower within the CAD2.5-billion (US$1.8-billion), 4.3-million-ft2 master-planned M City designed by New York architect Cooper Robertson. M3 will incorporate a ground-level, wraparound café and a pavilion containing an indoor pool and a gym. M City will offer lots of parks and green space and is viewed as a “catalyst for the evolution of Mississauga.”

Carleton University in Ottawa has implemented touchless elevator technology at Paterson Hall, a midrise building that houses departments including philosophy and history, the university announced in October. Enabling passengers to call an elevator from their smartphones, the pilot project originated in early 2018, when History Chair Dominique Marshall became aware students were having trouble with the only elevator serving the building. Marshall worked with Carleton’s Research, Education, Accessibility and Design initiative and technology company Eightfold, which was on campus installing Google Home modules, to develop the touchless elevator smartphone app. While Carleton’s ultimate goal is to provide accessibility to all, the touchless solution also is a “sanitary way to move around buildings” in the COVID-19 era, observed Carleton Accessibility Advisor Dean Mellway.

The developer of a proposed high-rise condominium project in Downtown Toronto has revised its plan to add two stories, Urban Toronto reported in October. The project, planned for a site at 199 Church Street, was originally submitted in early 2019 by CentreCourt and Parallax Developments as a 37-story, 121.25-m-tall tower. In mid-August 2020, however, the plan was resubmitted to stand 39 stories, or 129.5 m. Though taller, the gross floor area has been decreased, from 31,200 m2 to 28,000 m2, but the number of units has been increased, from 478 to 484. Renderings of the IBI Group’s design show cladding materials that include a window wall system with back-painted glass spandrels framed in charcoal-toned mullions and surrounded in a grid of black tar-toned metal panels. The building would preserve several heritage structures on the site and feature a public art mural on the rear of the structure. No construction timeline was reported.

A residential tower plan on the drawing board since fall 2018 for 5055 Joyce Street in Vancouver underwent major revisions while awaiting approval from the city council, Daily Hive reported on September 21. The plan, originally for a 32-story, 298-unit condominium tower, now calls for 360 rental apartments within a 36-story building. The podium has been downsized to create a new east-west thoroughfare, ground-level retail space is being decreased from 5,080 ft2 to 4,523 ft2, and a landscaped plaza is being added. A full floor of below-market-rate apartments will be available in the tower, which is being heightened from 305 to 315.3 ft. Apartment sizes will range from studios to three-bedroom units. The developer is Westbank, and the design is by Perkins and Will’s
Vancouver office.