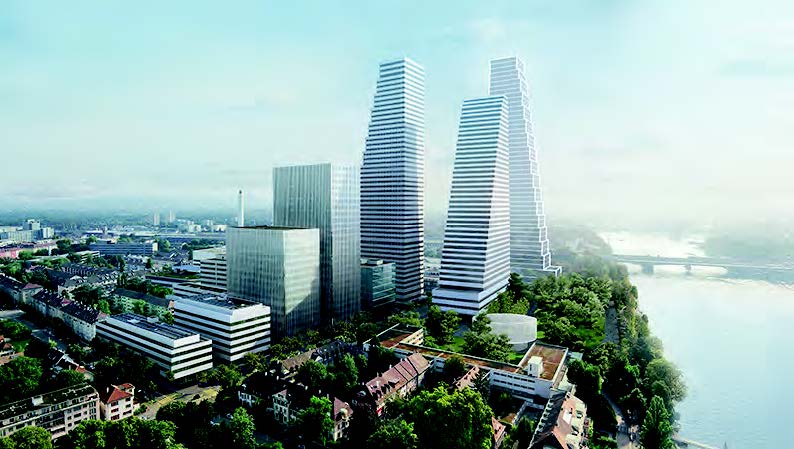 Roche hopes to build a new tower along the Rhine in Basel; image courtesy of Herzog & de Meuron.

Mario Barlassina, an industry veteran with more than 25 years’ experience, is new area sales manager for Italy for IGV Group SpA, headquartered in Milan. Barlassina previously worked for Otis in both the technical and sales departments and for thyssenkrupp Elevator in the sales department. He also worked for Wittur SpA and the Italian branch of SHAEFER GmbH as Italy sales manager. For IGV, he will focus on the Italy market and promoting new products, such as the lift-sanitation solutions CARe (ELEVATOR WORLD, July 2020) and ON AIR (EW, September 2020), a line of cars designed by Studio Marco Piva that incorporates antibacterial finishes.

A trio of KONE MonoSpace® elevators — two passenger and one service units — will be provided for Aurora Botnia, an 800-passenger ferry under construction at Rauna Marine Constructions shipyard in Finland, The Maritime Executive reported in October. Running on liquefied natural gas and biogas, the vessel is “the most environmentally friendly passenger ferry currently under construction,” the source said. Carrying passengers between Vaasa, Finland, and Umea, Sweden, the Wasaline vessel is scheduled for completion in 2021. Features of the KONE machine-room-less elevator system include weather-resistant construction and EcoDisc® gearless traction technology that lowers energy consumption.

Pharmaceutical company Roche Holding AG is working with architects Herzog & de Meuron to replace a cluster of vacant buildings on the Rhine River in Basel, Switzerland, with a new development that could include a high-rise office building up to 221 m tall, the Council on Tall Buildings and Urban Habitat reported in October. With a stepped profile, the new tower would mirror two existing Roche buildings. Including ample green space and a low-rise building, the new development intends to be “modern, sustainable and earthquake-resistant.” A riverfront promenade would also be redesigned. The development promises to help address a need for “new, modern and highly attractive workplaces in the heart of the city once the coronavirus pandemic is over,” Herzog & de Meuron Site Head Jürg Erismann said.

CP Automation of Scunthorpe, U.K., has appointed Jim Rosser as business development manager to oversee complementary products to variable speed drives (VSDs) and materials-handling areas of the business, the company announced in October. Rosser has eight years’ experience at CP Automation, having previously served as South Africa country manager. In his new role, Rosser will be tasked with leading the growth of the VSD complementary products and materials-handling segments by reaching new customers in new regions.

CP Automation is undertaking strategic expansion. It recently acquired Magnetek Elevator UK (EW, November 2020) and became the U.K. technical distributor and partner for Magnetek’s material-handling products, as well as a partner with power-quality and instrumentation specialist Chauvin Arnoux. The company said its recent moves will allow it to grow its existing VSD peripherals business, while freeing resources to invest time in power quality, materials handling and the elevator market.

Architecture firm Hodder + Partners, working with developer SFGE Properties, has submitted plans for Kings Tower, a proposed high rise in central Sheffield, U.K., that could become one of the tallest buildings in Yorkshire, the Council on Tall Buildings and Urban Habitat reported in September. The Manchester-based practice has submitted an application that seeks to demolish a shuttered retail store and replace it with a 38-story, 206-unit residential building in the city’s Castlegate district. As proposed, Kings Tower would stand 117 m tall, higher than the 101-m-tall St. Paul’s Tower in Sheffield and the
112-m-tall Bridgewater Place in Leeds. There are, however, several other proposed high rises in Yorkshire that aim to be the county’s tallest building, including the 40-story Globe Waterside Tower in Leeds, which was approved in 2018 and has a target height of 136 m. Construction on Kings Tower, proposed for 51-57 High Street, could begin in 2021, with completion targeted for fall 2023.

The Liverpool City Council has approved plans for Patagonia Place, a two-building residential development that would bring 278 apartments to the city’s waterfront, Echo reported in October. The project, on William Jessop Way at Prince’s Dock, would involve 31- and 11-story towers on a site that had previously been targeted for a 55-story building. Consultant Ian Ford, speaking before the council’s planning committee, said the development “has been redesigned and resubmitted” to make sure the GBP50-million (US$65.3-million) plan is viable. The two applicants behind the project are Peel and Your Housing Group, and it is being designed by architects Falconer Chester Hall. No construction timeline was reported.

Transport for London (TfL) has published renderings showing the entrance and ticket hall for the Elephant & Castle Underground Station, a project set for completion in the late 2020s, LondonSE1 reported in October. Based on the images, passengers will be able to reach their trains by either escalator or elevator. The station is being planned in conjunction with the extension of the Bakerloo line. The source reports that the COVID-19 pandemic has delayed TfL’s final approval of the plan, but in a move to keep the project on track, local officials have approved demolition of the Elephant & Castle shopping center, set to begin in October. However, construction work cannot start until TfL enters a binding agreement to complete the station, which is not expected until March 2021. TfL has set completion for 2029, but project developer Delancey is pressing for the station to be ready by fall 2028.

Tower To Be Tallest in Ireland Greenlit in Cork

The city council of Cork, Ireland, granted planning permission to developers of a 140-m-tall, 34-story mixed-use tower that will be the tallest, “by far,” in Ireland, Joe reported in October. Being developed by Tower Holdings Group, which has offices in NYC and Cork, the structure is set to rise on the old Port of Cork site on Custom House Quay. On the drawing board are a luxury hotel with a spa, a swimming pool and a gym; a restored custom house; and a sky bar and restaurant where visitors can enjoy city views. Also planned are an interactive visitors’ center highlighting Cork’s maritime heritage, retail, and food and beverage outlets, including a microdistillery.

Toshiba Elevator and Building Systems Corp. was one of only 75 submissions out of 7,298 worldwide to win a Gold iF Design award. The company’s elevator destination-control system FLOORNAVI allows passengers to specify destination floors before boarding elevators, reducing travel times, especially during peak use. Its ring-shaped icons and chest-high operations are designed for comfortable use.

Based in Hanover, Germany, the nonprofit iF Design Foundation traces its roots to the early 1950s and has built a reputation for its annual awards program that has grown to more than 6,000 entries annually, judged by a jury of more than 60 design experts worldwide. Of FLOORNAVI, the jury stated: “Toshiba has designed an efficient elevator [destination] control system in line with universal design to cater to the needs of able and disabled people. [Artificial intelligence] allows floor destinations to be bundled effectively, reducing waiting time. The simple and easy interface is readily adaptable to various architecture contexts.”

When Will We Go Back to the Office?

Trio of Towers Greenlighted in Melbourne