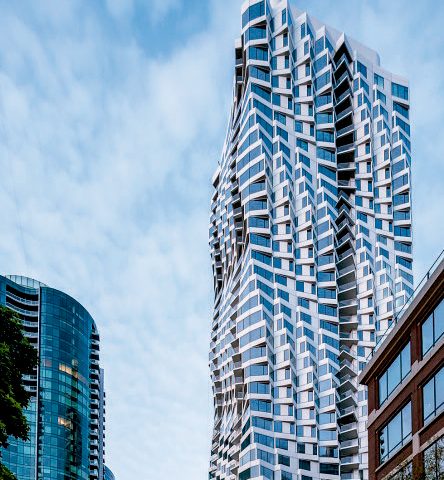 Work has completed on Mira, a 400-ft-tall residential tower in San Francisco; image from Studio Gang.

Arcline Investment Management, a private-equity firm with offices in San Francisco and NYC, has invested in two independent elevator companies and acquired a third. On August 11, Arcline said it had acquired Jersey Elevator, Inc., headquartered in Aberdeen, New Jersey. Jersey Elevator President John Sweeney, whose father started the company in 1974, said the acquisition provides it with a “strong foundation” for continued growth. On August 14 and 26, respectively, Arcline announced investment in D&D Elevator, headquartered in Yonkers, New York, and Kencor Elevator Systems, based in West Chester, Pennsylvania. Spokespeople for D&D and Kencor expressed confidence that Arcline’s investment will facilitate growth and provide long-term stability. Jersey Elevator, D&D and Kencor all provide modernization, maintenance, repair and new installation services throughout their respective areas, which are, Jersey Elevator, New Jersey and Pennsylvania; D&D, across New York state; and Kencor, across the Mid-Atlantic region.

Speaking on behalf of Arcline, which has US$1.5 billion in committed capital in companies that include those in the industrial technology and aerospace sectors, C. Mark Boelhouwer welcomed the new teams and observed the moves allow Arcline to significantly expand its presence in the U.S. Northeast. He observed Arcline plans to continue to grow “through complementary investments in technology and acquisitions.”

Otis announced it acquired Bay State Elevator, including its service portfolio and operations in Massachusetts, Connecticut, Vermont and upstate New York, in August. “We’re proud of the legacy we were able to build with Bay State Elevator and would like to thank all of our dedicated employees and customers,” said Buddy Potts, Bay State president. “We look forward to working together to serve existing Bay State customers and introduce them to our service offerings and comprehensive range of Otis products.” Bay State has locations in Springfield, Pittsfield and Worcester, Massachusetts; Albany/Plattsburgh, New York; Hartford/New Haven, Connecticut; and Burlington/Brattleboro, Vermont. Welcoming Bay State to Otis, Otis Americas President Jim Cramer observed the acquisition “expands our scale and density in the Northeast region.”

The Block, a 1.2-million-ft2 development proposed for downtown Birmingham, Alabama, would include a 48-story mixed-use tower, Yellowhammer News reported in August. If built, the high rise, to be called Dansby Tower, would be the tallest building in Alabama. The complete project, which has an estimated cost of US$250 million, is envisioned as a “pedestrian experience,” offering lodging and entertainment options, including bars, restaurants, music and entertainment venues and cafés. The tower, which would have hotel rooms and residential units, is named for former Auburn University and Arizona Cardinals football star Karlos Dansby, who is a chief investor in the project, along with Phoenix-based developer The Ultimate Fan. The project is seeking more investors, and no construction timeline was reported.

Work has completed on Mira, a 400-ft-tall residential tower in San Francisco, Architectural Digest reported in August. Designed by Studio Gang, Mira sports a twisting façade inspired by the city’s classic bay windows and that borrows technology from the aerospace industry to create a smooth exterior surface. The building holds 392 one- to three-bedroom luxury condominiums, with 156 units priced below market rate. Amenities include rooftop lounges, a fitness center, valet parking and 10,000 ft2 of street-level retail space.

The building is designed to be environmentally friendly. The high-efficiency façade reduces energy consumption, and the building has a graywater harvesting system, green roofs and variable refrigerant flow cooling and heating. The design is aiming for Leadership in Energy and Environmental Design Gold certification. The developer is Tishman Speyer.

An Eye on Retail

Light rail gets a boost; work wraps up on unique tower.

New Ways of Thinking About Evacuations