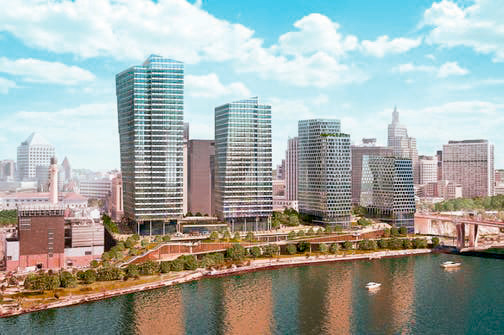 Rendering of RiversEdge in St. Paul; image by AECOM

Construction on One Vanderbilt, a 77-story supertall office tower described as a “tremendous addition to the Midtown skyline,” reached a milestone in July when its 100-ft-tall architectural spire was replaced. The spire was initially erected in September 2019 for the topping-out ceremony, then disassembled in December to allow construction cranes full access to the 1,401-ft.-tall structure. Kohn Pedersen Fox designed One Vanderbilt, which will be served by a Schindler vertical-transportation system (ELEVATOR WORLD, August 2019). The source said the most-anticipated feature of the supertall is its 1,000-ft-high The Summit outdoor observatory, designed by Snøhetta and set to open in October 2021.

Demolition preparation was underway in August to make way for a 544-ft-tall, 50-story, mixed-use skyscraper at 45-03 23rd Street in Hunters Point, Queens. With white terracotta panels and bronze surrounding floor-to-ceiling glass, the tower was designed by Fogarty Finger Architects and is being developed by Charney Cos. and Tavros Capital. The 350,844-ft2 property will offer 194,423 ft2 of residential space housing 285 condominiums, 100,000 ft2 of commercial space and 3,388 ft2 for community use. Amenities will include a round-the-clock doorman, a fitness center and resident lounges. Low-rise buildings surrounded by scaffolding occupied the site in August. No completion date was given.

The tower under construction at 18 Sixth Avenue in Prospect Heights in Brooklyn was near the halfway mark on the way up to its full, 49-story height, the source reported in July. The tower, designed by Perkins Eastman and developed in a joint venture between The Brodsky Organization and Greenland Forest City Partners, will stand nearly 500 ft and offer 858 rental units, of which 258 will be dedicated to affordable housing. It will total 740,000 ft2 of space and be the tallest building in the 22-acre, 15-building Pacific Park master plan. Photos taken in July show 18 Sixth Avenue lording over the rooftop of the Barclays Center next door. Cinder blocks were being placed to form the podium’s curtain wall, but the rest of the tower will have a uniform glass enclosure.

High-rise construction activity is picking up in the Greenpoint Landing development in Greenpoint, Brooklyn (EW, October 2018 and May 2019) with progress noted at two sites, the source reported in July. In the first one, at 221 West Street, work on the two-tower project has risen above street level. Also known as “Greenpoint Block D,” 221 West Street comprises 30- and 40-story residential towers. Designed by OMA and being developed by Brookfield Property Partners and Park Tower Group, the project broke ground in November 2019. Photos show a growing superstructure with scaffolding and supports in place for the start of the second story. The taller tower features a 40-ft cantilever, which contrasts with the shorter building’s simpler design. Both will feature a curtain wall design of pale-colored precast concrete panels around 8-ft-square windows. The project will hold 745 rental units with such amenities as a swimming pool and a fitness center. There will be 8,600 ft2 of retail space.

The other project, known as One Bell Slip, will result in a 31-story residential tower with 413 units within its 379,803 ft2. In a July visit to the site, it was noted that construction had progressed above the podium level. Renderings show curtain wall cladding similar to the nearby 37 and 41 Blue Slip towers.

One Bell Slip, also being developed by Brookfield Property Partners and Park Tower Group, is being designed by Handel Architects. No completion dates have been given for either project. When complete, the 22-acre Greenpoint Landing development will bring 10 buildings with 5,500 residential units, a K-8 public school and a park to the site along the East River.

The 45-story, mixed-use One South First, also known as Ten Grand Street, was complete in July. Part of the Domino Park development on the site of the old Domino Sugar factory along the East River in Williamsburg, Brooklyn (EW, April 2014), the structure contains 330 residential rentals, 150,000 ft2 of office space on 18 floors and 13,000 ft2 of ground-level retail. The design by COOKFOX features a white edifice with a grid of windows and a smaller section jutting out perpendicular to the main structure from a cutout. Resident amenities include a private, 48-seat theater; a fitness center; and rooftop cabanas. Office tenants have views of the East River and Manhattan. The developer is Two Trees Management.

A pair of nearly complete 498- and 440-ft-tall towers that include 1,115 residences at 22-44 Jackson Avenue in Long Island City (LIC) (EW, October 2014) points to the area’s emergence as a tall-building hotspot with a distinct, impressive skyline. Known as 5Pointz, the former graffiti artist mecca was designed by HTO Architects and developed by G&M Realty. Interiors by Mojo Stumer Associates feature artwork hearkening to the site’s graffiti past. Approximately 20% of the residential units will be affordable, and a podium linking the towers will house 40,000 ft2 of retail and parking for residents. 5Pointz is convenient to numerous subway stations.

The glass curtain wall on NYC’s Hard Rock Hotel (EW, April 2019) had nearly reached the top of the 35-story structure in August, a milestone that points to the speed with which the Times Square tower has come together. The 442-ft-tall, 291,000-ft2 tower being developed by Extell and Hard Rock International will bring 446 guest rooms and a list of amenities that includes two entertainment venues, meeting spaces, 24-hr dining options, a fitness center and a rooftop lounge. Set at 159 West 48th Street, the building’s lower half is wrapped in dark reflective glass, and metal framework forms the perimeter of the multistory podium. Once complete, a crown of tall, blank walls will display a lighted Hard Rock logo. The elevators are being provided by Schindler, and the custom cabs are by Elevator Interior Design (EW, May 2020). SLCE Architects is listed as the design and executive architect for the tower, which is scheduled for completion in 2022.

Construction on Long Island University’s (LIU) One University Plaza, a 34-story mixed-use structure at 61 DeKalb Avenue in Downtown Brooklyn, New York, is close to topping out, the source reported in July. The 435-ft-tall tower, designed by Perkins Eastman and developed by RXR Realty, will add 370,960 ft2 of new space to the LIU campus. New photos show glass curtain wall beginning to rise on the lower levels of the reinforced concrete superstructure. The structure itself had passed the main setback on the northern elevation, and only a few floors remained before construction reached the flat roof parapet. Renderings have shown glass railings at the top, which indicate a rooftop terrace. The entire development will span 600,200 ft2 and include 476 residential units, 183,530 ft2 for community facilities, an athletic field, fitness and wellness facilities, academic space, offices and parking for 564 vehicles. Affordable housing will account for 30% of the residential units. A completion date has not been announced.

The 323-ft-tall 30 West 39th Street in Midtown Manhattan has topped out, the source reported in August. When complete, the 27-story tower will bring 300 hotel rooms to the area. The reinforced concrete tower by developer Fortuna Realty, with a design by Peter Poon Architects, will offer 133,500 ft2. Construction on the building had made a great deal of progress since mid-January, when work had only just risen above the podium. By August, the structure had topped out, and the main, northern elevation was nearly completely clad in curtain wall. Work on the podium and upper floors was yet to complete, but when done, the building will offer a rooftop bar, ground-floor restaurant, lounge, fitness center and business center. Setbacks near street level will be topped with landscaped outdoor space. Though earlier reports projected completion this fall, sometime in the first half of 2021 appears more likely.

Bailong Elevators, Past and Present

Amos Rex: Futuristically Embracing the Past