Home » Articles » All Sills, All the Time 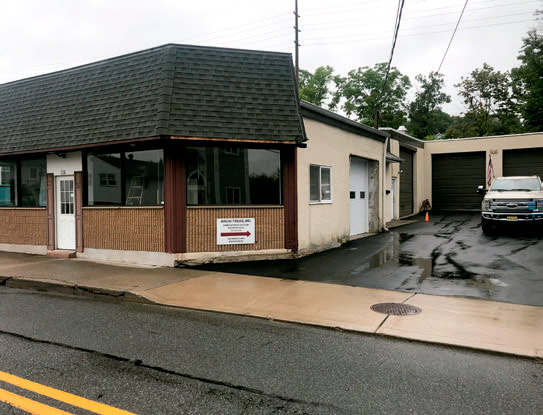 The Archi-Tread location on Myrtle Avenue in Boonton

A sill is a small elevator component — typically no more than a few inches wide and approximately 1 in thick — but this component has a vital role in the operation of an elevator. Sills are found in every elevator entrance and cab opening. A sill’s primary function is to provide a groove in which car doors travel when they are opening and closing.

In addition to serving as guides, sills also prevent car doors from rattling when the elevator is traversing up and down the shaft, thereby enhancing safety and comfort. They are an integral part of an elevator system that has experienced little change. Typically made from extruded metals, sills are subject to a barrage of abuse, from general foot traffic to construction and delivery personnel with heavy, bulky cargo. This usually results in clients coming back to contractors demanding that beat-up, unsightly sills be replaced.

This was what prompted Scott Akin to found his company, Archi-Tread® (short for “architectural treads”) in 2014. Before that, Akin had a long history in the vertical-transportation industry. He began working for Paterson, New Jersey-based EDI/ECI (Elevator Doors, Inc./Elevator Cabs, Inc.) in 1990. He spent several years on the shop floor, learning the industry, he says, “from the ground up.” He grabbed the chance to work in the field as often as possible, working his way up to vice president of operations, overseeing engineering, field operations and manufacturing.

In 2013, EDI/ECI was sold, and Akin decided it was time to strike out on his own. He says:

“Reflecting back on my 25 years of experience, I recognized there were many challenges that I faced with elevator sills. With new construction, high-end finishes were subject to damage from the daily abuse of the construction trades moving dumpsters and sheetrock carts in and out. Months later, the sill would end up as a punch-list item. When it came to the field installation teams that were modernizing an entrance, the only way to replace a sill was to chop it out with a demolition hammer, which, in many cases, ended up damaging the flooring or other surroundings.”

For months, Akin experimented with ideas in his basement, which eventually led to the creation of the first Sillskin® modernization product — essentially, a covering or veneer for an old sill. The original company was located in a 1,000-ft2 barn in Kinnelon, New Jersey, a small borough approximately 33 mi west of NYC.[1]

Akin was confident enough in his idea to take it to the U.S. Patent and Trademark Office. He was awarded a patent in 2016. Buoyed by solid sales, the next year saw Akin purchase a facility four times the size (4,000 ft2) and relocate operations to Boonton, New Jersey, approximately 10 mi south of the original location.

“It involves installing an overlay onto an existing entrance sill. A typical installation is completed within hours. Upon seeing this technology, the Architect of the Capitol [the builder and steward of the landmark buildings and grounds of Capitol Hill][2] installed new, bronze Sillskins in the Dirksen Senate Office Building in Washington, D.C.”

Demand for Sillskin has taken Akin and his team to locations like Hawaii’s Big Island, where Sillskins were installed at the recently renovated Mauna Lani resort. Akin estimates Archi-Tread has sold and installed more than 3,000 sills in the six years it’s been in business. The company’s sills are in 40 U.S. states and several Canadian provinces, with modernization panels accounting for nearly 60% of sales.

Archi-Tread’s portfolio includes nearly 40 NYC-area projects, from skyscrapers in Manhattan to interesting structures such as the Tiffany & Co. store on Fifth Avenue and the shark exhibit at the New York Aquarium on Coney Island.

The rest of sales are taken up by Sillskins for new construction, a pre-engineered, extruded aluminum base sill installed by the elevator contractor during elevator installation. Once a building’s heavy construction is completed, a trained Archi-Tread mechanic applies the Skillskin cladding, resulting, Akin says, in “a sill in pristine condition at turnover.” He says this factor was a vital decisionmaker for contractors on One and Three Gotham Center in Long Island City, NYC, 27-story office towers that represent one of the largest recent office projects outside of Manhattan.[3] The new-construction sills were also selected for the revitalization of the Italian Renaissance Revival landmark 108 Leonard Street in Tribeca, NYC, which was converted into condos last year.[4] Archi-Tread’s portfolio includes nearly 40 NYC-area projects, from skyscrapers in Manhattan to interesting structures such as the Tiffany & Co. store on Fifth Avenue and the shark exhibit at the New York Aquarium on Coney Island. Its sills are also found at diverse locations including:

Besides its bread-and-butter Sillskin, Archi-Tread prides itself on custom “one-offs,” which Akin says are memorable. Perhaps the most memorable, he says, is a job that dates back to the beginning:

“Our product line is one of those that one must see and touch to fully appreciate the value it brings.”
— Archi-Tread founder and President Scott Akin

“The very first job we had was unique, at 55 Washington Street in Brooklyn, New York. It was a nine-stop elevator with a running clearance of 2-1/2 in. at the top and 1 in. at the bottom. We had to custom-make Sillskin covers and build out the elevator sill starting at the top, incrementally reducing the size of each Sillskin cover as we went down the shaft.”

Akin says what’s most challenging about running his small business, which employs nine, is getting the word out about what Archi-Tread does, especially since “elevator sills, in general, have been unchanged for more than 100 years.” The best means of informing customers like consultants, architects and building owners that there is an alternative to the jackhammer approach has been tradeshows. Given all the pandemic-related cancellations, this has been extra challenging, Akin says. Still, he is optimistic the company will continue to grow as word spreads about his product. He states:

“Our product line is one of those that one must see and touch to fully appreciate the value it brings. We display every year at tradeshows including the National Association of Elevator Contractors and Elevator Conference of New York, as well as several architectural tradeshows put on by [BOMA International] and Ark US. The COVID-19 pandemic and the need for social distancing has made us recognize that we must reinvent how we market our product through different forms of electronic and social media.”

Expansion, partnerships and more from around the world

Here for the Beer