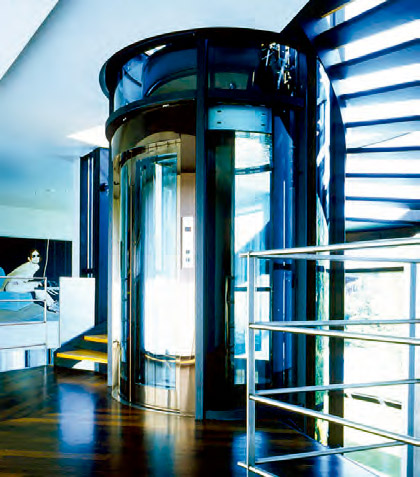 IGV says it draws from its technical expertise to meet architects’ most challenging design requirements.

Ansan, South Korea-based Seoul Viosys, a compound semiconductor solutions provider, has applied its Violeds disinfection technology to an escalator and moving-walk handrail product from Canada-based EHC Global. According to Seoul Viosys, Violeds uses ultraviolet LED light to provide robust disinfection for handrails. The technology “is optimally designed to match the speed, area and distance of the handrail to disinfect 99.9% of harmful viruses and bacteria in the areas exposed to the light,” Seoul Viosys asserts. EHC Global Vice President of Sales Patrick Bothwell says thousands of installations have been completed around the world, and demand is anticipated to continue through 2021 and beyond. Handrails implementing Violeds can be found in airports, public-transit systems, commercial buildings, shopping malls, healthcare facilities, sports venues, museums and government buildings.

E2S Warning Signals, based in West London, recently upgraded its B350TLA and B450TLA traffic-light warning-signal beacons. The former features a compact 100-X-140-mm housing intended for space-constrained applications or mounting directly onto machinery. The larger B450TLA units are 140 X 177 mm. Both were upgraded with an array of 18 high-output white LEDs, which give outputs up to 356 cd. The ultrasonic welded diffused lens determines the output light color (amber, blue, clear, green, red or yellow), which can be reconfigured onsite. There are now seven flash patterns, including a temporal pattern the company says is more effective, in addition to a steady output for status indication.

An included connector enables multiple units to be assembled into stacks, and dual pluggable terminals simplify cable installation for looped installations. The operating voltage ranges are 10-14/16-33 VDC and 48-260 VAC/VDC. The 1-Hz flash operating current is only 88 mA at 24 VDC, and the operating temperature is -40°C to +70°C.

E2S’ STA and STB families of customizable stack signals have also been upgraded with the latest 18 white LEDs. These are UL-approved for general signaling applications such as status indication, security and process control. The STA stacks have a SONF1 compact 100-dB alarm horn sounder to give an integrated audible/visual unit. The STB stacks are beacon-only arrays. Both versions are available with two, three or four units in a stack array terminated in a common junction box via a factory-fitted internal wiring loom to give a single external interconnect point. The UV-stable lenses are available in amber, blue, clear, green, magenta, red and yellow.

The Elevator and Escalator Division of Mitsubishi Electric US, Inc., headquartered in Cypress, California, has launched ReadyConnect™, a network communication protocol gateway that allows for connectivity between multiple building systems. The product is a network communication device that allows Mitsubishi Electric Diamond Trac® and Diamond HS™ elevator systems to communicate and connect with other building systems, acting as an interpreter.

“Historically, elevator systems have been relatively isolated and difficult to integrate with other building systems for monitoring and control,” Mitsubishi Electric explained. This gateway, however, “opens the doors to the next level of connectivity with the ability to speak to multiple systems. . . .” It works via a centralized package that transmits and receives call requests from third-party equipment through an Ethernet connection. These outside systems can then utilize the signals for their unique operations, while maintaining secure elevator operations. The product’s integration possibilities depend on the other building system capabilities and customer requirements. The company said that if a specific function is not available, it will work with customers to develop a custom solution.

IGV Group SpA of Milan, Italy, has introduced the Ad Hoc elevator line. Calling it ”the evolution of IGV’s DNA, which has its own vocation in the special project,” it concentrates effort on design in what IGV calls an industry “generally characterized by standardization.” The company said it chose Giulio Cappellini as art director (p. 30) to promote the concept of the lift becoming an integral part of architecture.

Tokyo-based Mitsubishi Electric Corp. has launched its new u series of escalators, designed to improve passenger safety while achieving significant energy savings over previous models, the company announced in December 2020. The u series will feature a “slow-stop” function to slowly decelerate the escalator during an emergency stop and will offer an optional “speed change operation,” which allows for low-speed running of the unit. These functions are designed to reduce the risk of passengers falling. Another option, built-in UV light, can lower microbial infection risks.

For energy savings, the u series has a variable-voltage, variable-frequency controller to optimize motor efficiency. An optional function can slow or stop the unit when there are no passengers, cutting energy consumption by up to 30%. Other energy cost savings are achieved by a regenerative converter that creates electricity for other uses in the building and optional low-consumption, long-life LED lights. Finally, the new model is available with optimized equipment space and features a 25% reduction in truss weight without loss of structural strength.