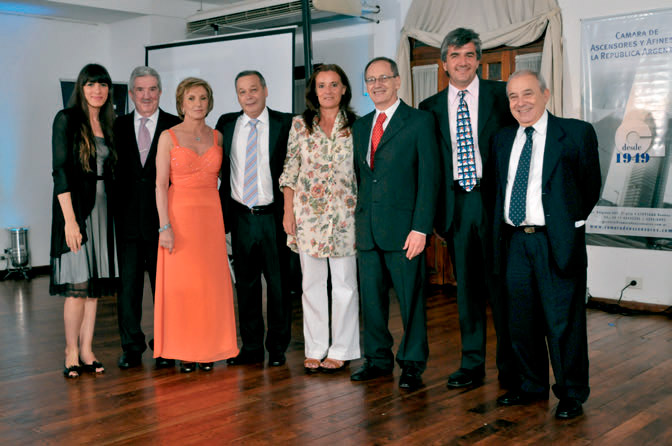 Subir & Bajar celebrated 50 years in 2020. The publication traces its roots to August 1970, when Cámara de Ascensores y Afines (CAA) launched a publication called El Ascensor (The Elevator), occupying a niche as the only trade publication in the Argentine vertical-transportation (VT) sector. That date marked the beginning of CAA’s editorial operations, to serve its members and the local VT sector. A special committee was formed toward this goal, with Héctor López Quintana — remembered as CAA’s honorary associate and ad-hoc historian — as one of its members.

Through ups and downs, the magazine succeeded in being published, even though, in the beginning, that occurred only sporadically. However, thanks to the efforts of its directors and support of CAA presidents, as well as the financial contributions of its members and advertisers, it developed over the years using different formats and names.

During this 50-year period, the publication grew from a simple, informative bulletin to a magazine similar to the present one, bearing the name Revista de la Cámara de Ascensores y Afines. This iteration was under the direction of Nicolás Vrdoljak, with Juan Carlos Bissi as editorial secretary. In 1993, its board chose the much-more-apt name Subir & Bajar (to go up and down) when its 22nd issue was released under Héctor López Quintana’s presidency.

In 2004, Chair Juan Carlos Leis and the steering committee decided to relaunch the publication, appointing a new director, Luis Maldacena and editorial secretary, your reporter. In 1995, your reporter was appointed ELEVATOR WORLD’s South America correspondent by EW founder William C. Sturgeon. This position helped open many doors and enabled contact with the international press and VT industry associations. This arrangement would prove even more helpful in the coming years.

Since its relaunch, when bimonthly publication was finally achieved and strong communication with the global industry was established, both CAA and Subir & Bajar went beyond Argentine borders to occupy an important role among the international associations and publications dedicated to the VT industry. The association and its magazine have a regular presence at important tradeshows, including Interlift in Germany, Expo Milano in Italy, ExpoElevador in Brazil and the National Association of Elevator Contractors expo in the U.S.

In 2013, Subir & Bajar took a big step forward when CAA, represented by its chair, Ernesto Espoille, signed an agreement with EW to partner with the world-recognized magazine. The years-long friendship and mutual confidence developed among those involved with Subir & Bajar and EW, most notably Editor-at-Large/Publisher Ricia Sturgeon-Hendrick and President T.Bruce MacKinnon, simplified negotiations and expanded the scope of both publications in Latin America.

The magazine began to be distributed in digital format; the size of the print edition has grown to match those of international publications. At present, Subir & Bajar reaches approximately 4,000 local and foreign readers.

Most CAA members have consistently contributed to the magazine’s support. Directors, editorial secretaries, translators, designers and administrative employees joined the effort to improve quality and meet EW deadlines. Moreover, improvements were due, in large part, to advertisers’ trust in and support of the magazine. CAA and Subir & Bajar express their most sincere thanks to all.

Unfortunately, due to the pandemic, it is not possible to celebrate the occasion with a dinner dance, as was done on the 40th anniversary, nor will it be possible to be together at the usual end-of-the–year luncheon given in honor of nonmember advertisers. Hopefully, celebrations will take place in the near future!

The Right Thing to Do

Technology for the 21st Elevator Century