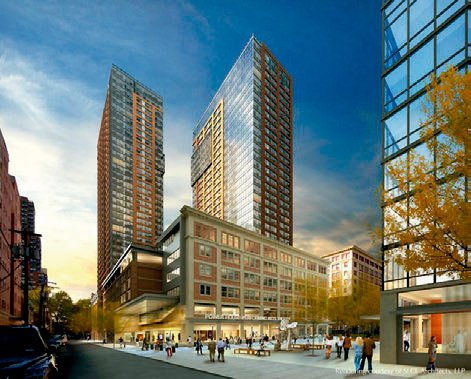 88 Regent Street, a 32-story, mixed-use tower, topped out in November 2020 ahead of anticipated completion this year, New York YIMBY reported. Developed by Regent Street, LLC and designed by Marchetto Higgins Stieve, the building will house nearly 400 rental apartments, 9,110 ft2 of retail and 5,595 ft2 of office space. At the intersection of Jersey Avenue and Regent Street, 88 Regent includes a 12-story podium that, in November, was almost entirely covered in glass. The main structure will feature a rounded western corner topped by a glass cupola.

Nearly 1,100 new residential units are expected for SoHo West (south of Hoboken, west of NYC) via three towers rising at least 25 stories and a historic building restoration, The Jersey Journal reported in October 2020. Statco, a four-phase project being developed by Manhattan Building Co., is planned for several lots between 14th and 16th streets, bound by Coles and Monmouth streets. Phase one has received planning board approval and is underway. It entails construction of a 25-story tower with 350 residential units, 307 parking spaces and retail space. Phases two through four will feature, in order:

The addition of 99 more residential units, 19,000 ft2 of retail and 202 off-street parking spaces to the development was expected but not detailed. Affordable housing is not mentioned, but two public parks and a “public use facility” are to be constructed. The source noted that recent residential projects have made SoHo West “one of Jersey City’s hottest neighborhoods for new development in recent years.”

Excavation to Begin Soon on Phase Three of Project

Excavation is expected to begin soon at 151 Bay Street, the site of a 33-story mixed-use tower that will make up the third phase of Provost Square complex, New York YIMBY reported in November 2020. With a design by SLCE Architects, the tower will incorporate part of the façade of the former A&P Annex Building, which has been stripped to its concrete frame. Once complete, phase three will bring 259 residences, 6,289 ft2 of retail and a parking structure with 218 spaces to the corner of Provost and Bay streets. The former A&P building will serve as part of the lobby for a 550-seat, 26,532-ft2 performing arts center. The complex includes plans for 950 residential units, more than 40,000 ft2 of retail space, a 26,000-ft2 pedestrian plaza and 17,706 ft2 of multipurpose art space. Phase four will consist of a five-story building with 32 housing units, 2,600 ft2 of ground-floor retail and a rooftop space. The developer is Toll Brothers.

Architect Woods Bagot has released a revised design for a pair of 51-story, 710-ft-tall mixed-use towers at 1 Journal Square Plaza, New York YIMBY reported in November 2020. Following successful resolution of litigation with Jersey City, the new design for both towers features a glass curtain wall with horizontal extrusions along portions of the exteriors. The previous, boxier design was also 710 ft tall but comprised 64 stories. Developed by Kushner Cos., the 1.9-million-ft2 development will have a nine-story podium housing residences, retail, parking and shared services. The towers themselves will offer an additional 1.3 million ft2 of residential space with atotal of roughly 1,500 units of varying sizes. Groundbreaking is anticipated in 2021.

Renderings showing a narrow, rectangular tower topped by rooftop amenities for residents at 618 Pavonia Avenue have been released, New York YIMBY reported. Designed by C3D Architecture, the 27-story structure is the third and final tower of Journal Square, developed by Namdar Group. It will include 5,500 ft2 of ground-level retail, offices on the second through fourth floors and 376 residences of varying sizes. On the rooftop will be a lounge and café, a pool, an outdoor kitchen, a common pantry, a residents’ club and an outdoor recreation area. Jersey City is planning to provide infrastructure, including a pedestrian walkway.

Progress made on supertall buildings in Noida, Colombo.

Stepping Up as a Leader