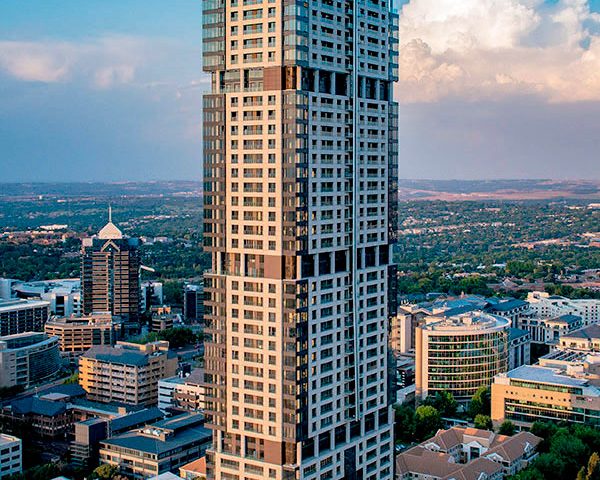 The Leonardo in Sandton, part of Johannesburg, South Africa; image courtesy of The Skyscraper Center

South Africa’s potential to be a market leader in having Africa’s tallest skyscrapers was reaffirmed last year when the US$172-million Leonardo tower was completed after nearly five years of construction. The Leonardo, located at 75 Maude Street in Sandton, Johannesburg, approximately 100 m from the Johannesburg Stock Exchange, is a 55-story concrete structure owned by Legacy Group and Nedbank and developed by Seventy-Five on Maude Pty Ltd.

Now ranked the second-tallest building in Africa, after Algeria’s 265-m Great Mosque of Algiers, the mixed-use Leonardo, constructed of concrete and masonry, rises 234 m (767 ft), eclipsing the 223-m-tall Carlton Centre, which had held the title of South Africa’s tallest building since 1973. “The Carlton Centre has been a stalwart and a landmark of much appreciation to many of us in the building industry since 1973,” said Jamie Hendry, Legacy Group Development Director.

According to South Africa-based Co-Arc Architects, Leonardo’s designer, “The tower is an appropriate response to climate and social factors, as well as a highly innovative commercial model, designed to be complete and viable at a variety of heights.” It has 241 apartments, 128 guest rooms, street-level shops and an above-ground podium with a swimming pool and a restaurant. It was constructed by South Africa-based infrastructure development firm Aveng Grinaker LTA. “The orientation and layout of the plans provide flexible floor space at every level of the tower, maximizing views and minimizing climate effects,” observed Co-Arc Architects.

The hotel rooms and retail outlets are linked by an escalator to an interactive mixed-use lobby space that has a conference venue; a reception area for the apartments and penthouse suites, each valued at ZAR180 million (US$10.5 million); offices; a coffee shop; and a bar.

“The structure and servicing are expressed in the form of the building, resulting in an articulated slender tower that has exceeded commercial expectations,” said Co-Arc Architects, a company with a 50-year history
in architecture.

Soon after the Leonardo building was completed in 2019, it was declared the winner of the 2019 international Africa Macael Award, having been judged as “functional, technologically advanced and already a symbol for South Africa.” The Macael Award was launched in 1985 to give recognition to “professionals who have excelled, especially in the fields of architecture, crafts and design at the national and international level.”

Leonardo’s developer utilized composite material of engineered stone for the building that “allow(s) for a lightweight perimeter skin that forms a weather shield and creates shaded deep recesses for glazed balconies at every level” as cladding.

The engineered stone, or quartz surfacing, is produced at a rate of more than 20 million m2 of slabs annually, according to the International Surface Fabricators Association (ISFA). “With experts predicting a growth rate of around 10% per year for at least the next several years, there is no doubt it will continue to make its mark on the surfacing world for a long time to come,” said ISFA.

Vertical transportation at the Leonardo comprising high-speed lifts was imported and assembled locally by Schindler through its affiliate in South Africa, Schindler Lifts SA (Pty) Ltd. Schindler broke ground with the introduction of its 7000 series in Africa. The Schindler 7000 elevator model was introduced to the global market around 2006 to replace the high-speed gearless Schindler 700 model. It can move at a speed of 10 m/s and travel up to 500 m.

Schindler also supplied six of its 5500 series elevators, ranging from 1450-1600 kg and capable of traveling at a speed of 1.75-3 m/s over 30-70 m. The company said the 5500 series “combines performance, flexibility and design, which makes it easy to fit the requirements of commercial [and] mid- and high-end residential buildings.”

Two Schindler 9300 lifts were also supplied. These elevators, Schindler said, “can be adapted to. . . a shopping mall, multiplex cinema, museum, furniture or shoe store, [or] even a public-transportation facility, like a train station.”

The region’s tall buildings market is still limited to structures shorter than 250 m. The total number of tall buildings in South Africa, especially those rising above 100 m, has remained the same for many years, but the completion of the Leonardo has added to the list of skyscrapers more than 200 m high in Johannesburg. The city is the only one in South Africa with buildings at least 200 m high and above. Another 20 buildings in Johannesburg are above 150 m, while 13 are above 100 m.

True to Her Ideals